A simple hello can change everything.

For singer-songwriters and multi-instrumentalists Sherry Lynn-Lee and George Paolini, a chance meeting at an open mic transformed unlikely bedfellows into sympathetic, artistic souls.

The duo which goes under the moniker 23rd Hour, announced its debut album, Perfect Strangers, a collection of songs that melds eclectic and urbane musicality with pop accessibility and poetic sentiments. The band name refers to the pair’s very first jam session where, after 23 hours of playing together, the twosome’s disparate pool of influences coalesced in an original song.

“The night we first got together, I didn’t know where things would go. On the surface, it seemed like we had nothing in common,” recalls George. “We soon found out we were not oil and water—we were two complementary elements that came together to form an alloy.”

Sherry and George’s artistry encompasses jazz, classical, rock, folk, and pop. Their individual aesthetics, when intertwined, hit that sweet spot of subtle adventurousness epitomized by artists such as James Taylor, Joni Mitchell, and Norah Jones. Though the duo is only now issuing their debut, it has already had the tracks “Wonder” and “Looking” placed in the movie Three Days In August, which was released in 2016.

Sherry and George creatively interlace as songwriters, singers, and instrumentalists. Songs on 23rd Hour fluidly shift from Sherry at the center, with George on background vocals, to tunes led by George with Sherry providing support.

George sings in an understated baritone, and Sherry possesses a versatile mezzo- soprano. Often their vocals blend in tight, flowing harmonies. Both are gifted instrumentalists, proficient on guitar, piano, mandolin, harmonica. And they dabble in cello, clarinet, ukulele and percussion.

Live, the duo offers a captivating experience for the audience. They keep things fresh by shifting instrumentation, and alternating lead and harmony vocal roles. Sherry and George’s repertoire extends from their deep catalog of originals to imaginative renditions of popular tunes. The pair’s show is suited to a variety of settings—from intimate duo performances to lush full-band shows.

Sherry first met George at an open mic in the Bay Area after she relocated from Toronto, Canada. Up until that point, Sherry was a solo artist with a promising career. She grew up singing, playing piano, and loving classical music. Prior to meeting Sherry, George was also a solo artist who grew up a Beatles fanatic, and played in rock bands until he discovered jazz. Upon high school graduation, he opted to refine his musicianship through attending Berklee School of Music.

At the time of their meeting, George was jaded about collaborative efforts, having tired of playing in bands. Sherry recalls: “I loved his set, and when I went up to introduce myself, I asked him: ‘Do you ever collaborate with people on your songs, and if so, would you be interested in collaborating with me?’ He lied and said yes to both.” George laughs and responds: “It was a perfunctory answer. I had heard Sherry play and knew she was gifted, I just didn’t think we would have any music in common.”

It has been a transformative two-year journey for Sherry and George. “The fact that we got together seems almost magical to me. It’s changed me for the better,” George says. Sherry adds: “The lesson I’ve learned is it never hurts to ask.” Show less

Run Your DIY Music Career Like A Tech Start-up

“The singer has a great voice and it is super smooth. It reminds me a little of a Norah Jones voice with a Ben Folds piano vibe.” -Introvert Guide Podcast 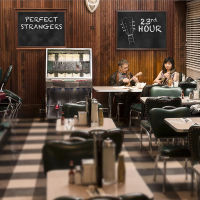 All About Jazz musician pages are maintained by musicians, publicists and trusted members like you. Interested? Tell us why you would like to improve the 23rd Hour musician page.