Harnessing Beasley and Ndugu’s hometown earthy undertones of New Orleans and Jones’ Chicago street-funk 3 Brave Souls are knee-deep in the groove on their self-titled debut for BFM Jazz.

From the revved-up, rootsy Meters romp “Wanna Get Away” and the downhome “Nothing Left to Say,” both featuring the remarkably soulful vocals of Sy Smith, to the hard-hitting Fela Kuti like instrumental “Yabis,” 3 Brave Souls make a potent statement on this debut outing. The aptly titled “Nail it Down” is a thick pocket groover with spoken words of wisdom by Ndugu. The mellow ballad “Come and Gone” is a showcase for Jones’ melodic penchant on the bass while Beasley conjures a hypnotic world music vibe on the exotic “Ayala.” Guest harmonica ace Gregoire Maret is featured on the lovely and lyrical “N2U,” Daryl Jones showcases his vocal ability on “Stay” with a Sly Stone-ish sound; and Sy Smith returns for the gorgeous ballad “Love’s Graces,” which Beasley wrote.

Bassist extraordinaire Darryl Jones is one half of the funky rhythm tandem in 3 Brave Souls. With his rock, jazz, blues experience playing with Miles Davis, Michael Jackson, and since 1993 touring with the Rolling Stones, groovemeister of the highest order, Jones’ credits include work with such pop stars as Cher, Madonna, Sting, Lionel Richie, Eric Clapton and Peter Gabriel.

The distinctive drums on Michael Jackson’s “Billie Jean” could only be Leon “Ndugu” Chancler. With a list of studio recording credits as long as the Dead Sea Scrolls, inventive drummer and consummate timekeeper, Ndugu has recorded and toured with Santana, Miles Davis, Michael Jackson, Herbie Hancock, George Duke and Weather Report.

3 Brave Souls, Beasley, Ndugu, & Jones, came together to write listenable, danceable melodic music bringing the funk and plenty of downhome soul, with an undercurrent of jazz sensibility to move you to the dance floor! Show less 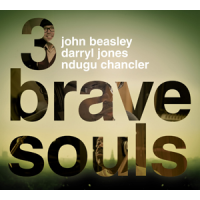 Publicist
Two for the Show Media

All About Jazz musician pages are maintained by musicians, publicists and trusted members like you. Interested? Tell us why you would like to improve the 3 Brave Souls musician page.