Cocomama is an All Woman World Latin Fusion ensemble that mixes Latin rhythms with subtle musical flavors from all over the globe.

The ladies who make up Cocomama hail from France, Argentina, Israel, Mexico, the U.S., and Cuba, and their repertoire is just as far-reaching. They can switch smoothly from Cuban Salsa to Argentinian tango to Brazilian samba to songs from the countryside of France set to Afro-Cuban beats, all the while tinging them with their sense of jazz.

Among the members of Cocomama, congera Mayra Casales tours with The Ojays, vocalist Ariacne Trujillo was nominated for a Grammy Award, bassist Jennifer Vincent appeared with the Jazz at Lincoln Center All-Stars in the hit Broadway musical revue After Midnight, vocalists Christelle Durandy and Sofia Tosello have been touring the globe with their own projects...

Cocomama take you on a musical Latin adventure around the world!!! 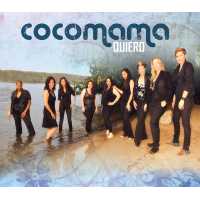 All About Jazz musician pages are maintained by musicians, publicists and trusted members like you. Interested? Tell us why you would like to improve the Cocomama musician page.