Marco Machera is an Italian musician/songwriter. He likes to say, “I don’t play music – I make it happen.”

Mainly known as an accomplished bass player, he is also a singer, guitarist and drummer. Marco supported the acclaimed band, Marillion (awarded #1 album of the year 2012 by Prog Rock Readers Poll) during their concerts in Italy in January 2013. Additionally, Marco played bass for Paul Gilbert, one of the world’s premier guitarists during some of his clinic tour dates in 2009, 2011 and 2015. In December 2012, Marco joined David Lynch produced Texan chanteuse and femme fatale, Chrysta Bell, for the Italian leg of her European “This Train” tour.

Back in 2009, Marco scored the soundtrack for a live performance scripted by actress/director Martina Sacchetti and performed at the WCA Theatre of the University of the Arts of London. At the same time, he also started working on what would become his debut solo-album – “One Time, Somewhere”.

One Time, Somewhere features the talents of Francesco Zampi, Pat Mastelotto, Rob Fetters, and iconic artist Mark Kostabi on most tracks. The result is an extremely fresh and diverse album. Critically acclaimed drummer Pat Mastelotto says: “I had a lot of fun working on Marco’s record. One of the first tracks he sent me sounded like The Beatles with Tom Waits! What a band that would have been,” and also added: “We have stayed in touch throughout the year as Marco overdubbed and mixed, so I can tell he has a keen ear for details without loosing the big picture. It’s pop packed with nice surprises.”

Here’s what legendary guitarist and songwriter Steve Hackett has to say about One Time, Somewhere: “It is really good and well crafted and I very much enjoyed it. Beautiful voice at the beginning and interesting atmospheres and contrasting moods. Days of Summertime has some fascinating sounds.”

The second solo album, titled Dime Novels, is out on January 28th 2014. The album was produced by Machera and long-time collaborator, Francesco Zampi (who also contributed sonic treatments to the songs), and features Pat Mastelotto, Tony Levin, Markus Reuter (of King Crimson and Stick Men fame), Andrea Faccioli, Jennifer Maidman (Penguin Cafe Orchestra, David Sylvian), among others. When asked about the record, Machera said “I think Dime Novels sounds like an adventurous pop record. It’s quirky, imaginative, cinematic at times. Each song has a distinctive feel.”

A new solo effort, Small Music From Broken Windows, is released on September 1st 2017. An intimate, personal and reflective album, based on “The Outsider”, a short story by H.P. Lovecraft.

Marco also collaborates with American bassist Julie Slick (Adrian Belew Power Trio, The Crimson ProjeKCt, Springs) for the EchoTest project. The electric bass has a prominent role throughout their compositions – compelling ‘bass duets’ pushing the boundaries of progressive and loop music. They have released three albums together – Fourth Dementia (2014) Le Fil Rouge (2015), and most recently From Two Balconies (2017), with the help of a variety of guests, including drummers Eric Slick, Tobias Ralph and Pat Mastelotto, violinist Sarah Anderson, and guitar player Tim Motzer. Show less 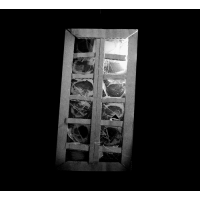 All About Jazz musician pages are maintained by musicians, publicists and trusted members like you. Interested? Tell us why you would like to improve the MarcoMachera musician page.