Aaron Dolman is a drummer, composer and bandleader born and based in Montreal who is rapidly establishing himself as an exciting voice in the city's diverse music scene. Having performed with many notable North-American Jazz musicians, including André White, Sasha Berliner, Jean-Michel Pilc, Dan Faulk, Kevin Dean, and Mike Rud, as well as members of Canada’s diverse folk music scene, such as Connie Kaldor and Folle Avoine, he is equally at home performing in contemporary Jazz and experimental musical contexts as he is in Folk, Rock and Pop settings.

Aaron will release his first full-length album of original music on November 22nd of this year. Inspired by the feelings of nostalgia that are stirred up when sifting through old family photos, or driving through the Canadian prairies, “Nostalgia and Other Fantasies” is a collection of original music that weaves together two of his great musical loves – Folk and Jazz – to create works that sway between evocative melodies, exciting improvisations and ethereal soundscapes. The album features his 5-piece chamber-ensemble, which includes Caitlin Smith on viola, Zacharie Bachand and Marcus Savard-Lowry on acoustic and electric guitars, and Mathieu McConnell on bass.

Aaron has been the recipient of a number of awards and accolades, most notably the Lou Williamson Jazz Award (2017), The Schulich School of Music Award for Outstanding Achievement in Performance (2017) and three Schulich School of Music Scholarships 2016, 2017 and 2018. He also holds a Bachelor of Music in Jazz Performance from McGill University, where he was a member of the school's flagship ensemble - the Jazz Orchestra 1 - led by Juno-winning composer Christine Jensen. Alayne McGregor of ottawajazzscene.ca praised Aaron’s “powerful drumming” as a driving force of that “hard-swinging” and “vibrant” ensemble. In his final year of studies, he was invited to share the stage with McGill’s 2019 Catherine Thornhill Steele guest Artist, acclaimed trumpeter and composer Ambrose Akinmusire.

When home in Montreal, Aaron is also coveted sideman and can be found regularly in many of Montreal's local clubs, cafés and performance spaces. When on the road, Aaron performs at Jazz and Folk festivals across Canada, most recently the Montreal International Jazz Festival, the Toronto Undergraduate Jazz Festival, the Canmore Folk Music Festival and the Regina Folk Festival. Show less 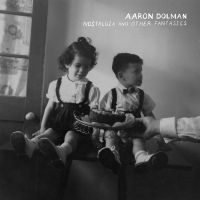 Aaron Dolman
Nostalgia and Other Fantasies

All About Jazz musician pages are maintained by musicians, publicists and trusted members like you. Interested? Tell us why you would like to improve the Aaron Dolman musician page.