Adam Birnbaum is emerging as one of the top young voices in jazz piano. After receiving an Artist's Diploma from Juilliard as a member of the inaugural class in Jazz Studies in 2003, Mr. Birnbaum went on to win the American Jazz Piano Competition in May 2004 to become the American Pianists Association's Cole Porter fellow in Jazz. In October, 2006, Mr. Birnbaum received the first ever “special honor” prize at the Martial Solal Competition in Paris. An active performer, Mr. Birnbaum has performed in venues such as the Indianapolis Jazz Festival, Kennedy Center Jazz Club, NPR Jazz Christmas 2004, the Tanglewood Jazz Festival, Festival Dei Due Mondi in Spoleto, Italy, Viva Musica Festival in Bratislava, as well as at jazz clubs such as Birdland, Blues Alley, The Blue Note, Dizzy's Club Coca-Cola, the Kitano Hotel and the Zinc Bar. Mr. Birnbaum has performed and recorded with legends such as Carl Allen, Wycliffe Gordon, Rodney Green, Victor Lewis, Wynton Marsalis, Lewis Nash, Ira Sullivan, Peter Washington and Ben Wolfe.

Mr. Birnbaum's early music education took place at the New England Conservatory of Music's Preparatory School, where he studied music theory, chamber music, and classical and jazz performance. Mr. Birnbaum graduated from the Honors Program at Boston College in 2001 with a B.A. in Computer Science before attending Juilliard. Now based in New York City, Mr. Birnbaum has established a busy performing career as a sideman and as a leader. In 2002 he was a guest artist with the Lincoln Center Jazz Orchestra at Alice Tully Hall. Mr. Birnbaum's trio has opened for both Brad Mehldau and Herbie Hancock. His quintet was in residence in July 2006 at the Festival Dei Due Mondi in Spoleto, Italy. In March, 2007 Mr. Birnbaum toured internationally as a part of the Rhythm Road program sponsored by Jazz at Lincoln Center and the US State Department.

Mr. Birnbaum has developed an innovative approach to solo piano that has allowed him to pioneer jazz performance in classical series and concert halls. He was the first jazz pianist to present a recital at the prestigious Gilmore Rising Stars Recital Series in Kalamazoo, Michigan, in December 2004. In October 2005, he presented the first solo jazz piano recital at another series, the Phillips Collection Sunday Concerts, in Washington, D.C. In May 2006, Mr. Birnbaum toured the Czech Republic playing solo concerts. In November 2006, Mr. Birnbaum presented the first solo jazz piano recital at the Dumbarton Concert Series in Washington, DC, and in April 2007 he made his New York solo debut as part of the Fazioli Salon series at the Klavierhaus.

“A Comme Amour,” Mr. Birnbaum's second trio album for Pony Canyon records, was released in November, 2006. His first album, “Ballade Pour Adeline” received a Gold Disk award from Swing Journal as one of the top albums of 2006. He has studied with Kenny Barron, Danilo Perez, and Fred Hersch. Show less 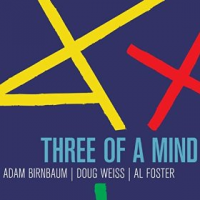 Three of a Mind 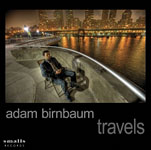 Adam Birnbaum
Three of a Mind

All About Jazz musician pages are maintained by musicians, publicists and trusted members like you. Interested? Tell us why you would like to improve the Adam Birnbaum musician page.