Originally from Derry, New Hampshire, Adam is a graduate of the University of Miami Frost School of Music with a B.M. in Studio Music & Jazz. Adam has accumulated over a decade of experience in music, and has developed professional-grade skills in saxophone/flute/clarniet performance, teaching, composition, arranging, film and media music, orchestration, video editing, and much more.

At the Frost School of Music, Adam studied saxophone under Gary Keller. He has performed with many ensembles at Frost, including the Downbeat Award-winning Concert Jazz Band under the direction of Grammy-Winning musician John Daversa, the Frost Septet, and the Henry Mancini Institute Orchestra, as well as numerous other ensembles. In addition to his studies with Professor Keller, Adam studied composition with renowned composers Gary Lindsay, Martin Bejerano, and Stephen Guerra at the Frost School.

In the summer of 2018, Adam spent a semester abroad studying jazz composition and German language at Johannes Gutenberg Universität in Mainz, Germany. Under the tutelage of Jesse Milliner and Claudius Valk, Adam deepened his knowledge of music greatly and brought back a new experimental mindset to Miami.

Over the years, Adam has shared the stage with the likes of Quincy Jones, Adam Rogers, Maria Schneider, Arturo Sandoval, Bryan Lynch, and John Williams to name a few. In 2019 and 2017, Adam was named the recipient of Student Downbeat Awards for his original compositions “Minor Conniption” and “All Bets Are Off” respectively, as well as the winner of the 2017 BMI William Golstein Scholarship for outstanding work in the field of jazz composition.

In February 2019, Adam released his debut album as a bandleader, Arethusa Falls. The album showcases Adam's skills in improvised music and jazz composition, featuring six of his original compositions written in 2017- 2018. It is available for streaming and purchase from all digital music platforms. Show less 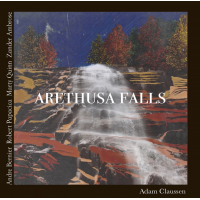 All About Jazz musician pages are maintained by musicians, publicists and trusted members like you. Interested? Tell us why you would like to improve the Adam Claussen musician page.