Adam Harris is an Oregon-based jazz saxophonist, flutist, composer and teacher. At 28 years old, he is already establishing a reputation for himself as a powerful voice in the Pacific Northwest music scene.

In 2004, he moved from Oregon to Seattle, WA where he began studying at Cornish College of the Arts. While at Cornish, Adam had the privilege of working with many of the area's most well known jazz musicians, which included Julian Priester, Jovino Santos Neto, Jay Thomas, Jim Knapp and Denney Goodhew.

After graduating with a Bachelor's Degree in Music from Cornish, Adam attended the New England Conservatory in Boston, MA, where he earned his Master's of Music degree in December, 2011. While in Boston, he had the fortune of working with critically acclaimed musicians such as Dave Holland, Donny McCaslin, Miguel Zenon, Jerry Bergonzi, George Garzone, Billy Hart and Cecil Mcbee.

Adam currently resides in Eugene, Oregon, where he performs and teaches regularly. He recently recorded his first album as a leader, “The Adam Harris Quintet - Live at the Jazz Station”, which is expected to be released in March of 2015. For more information, please visit his website:www.adamharrisjazz.com 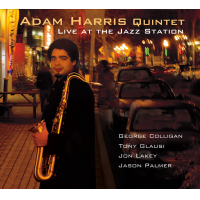 All About Jazz musician pages are maintained by musicians, publicists and trusted members like you. Interested? Tell us why you would like to improve the Adam Harris musician page.