Los Angeles based Baritone Saxophonist Adam Schroeder has rapidly become a major force throughout the global jazz scene. Schroeder; a first call for a growing multitude of musical circumstances, is known equally for his hard- driving muscular swing, ferocious be-bopping, meticulous musicianship and leadership as well as his exquisite sound. For Schroeder’s debut release “A Handful of Stars” (Capri Records July 20th, 2010), his approach has been described as possessing soul a la Carney, intricate lines like those of Chaloff and Adams, the in-the-pocket swing of Mulligan and the hard-driving take- no-prisoners approach of Smulyan. This description of Schroeder’s approach is a concise ‘short list’ of the baritone saxophone lineage with which Schroeder’s name should duly be added for he is truly a master of the most unwieldy of traditional jazz instruments.

Born and raised in Sioux City, Iowa, Adam began his musical studies on alto saxophone while in grade school. After an introduction to Charlie Parker in 1992, Schroeder’s musical interest became fixed solely within the jazz idiom. Mr. Schroeder finally discovered his saxophonistic voice between his junior and senior years, switching from the alto over to the baritone saxophone. Later that same year, Adam was asked to fill the baritone role in the college big band at Clark Terry’s International Institute of Jazz Studies. The acceptance of this position sparked a relationship with the famed Clark Terry, which lead to a multitude of musical opportunities shared between the two players, ongoing still today.

In June of 2000, Downbeat Magazine named Mr. Schroeder the Co-Winner of the “Jazz Instrumental Soloist Award” (the 23rd Annual Student Music Awards); the first time that a Baritone Saxophonist has been given this prestigious honor. Later that same year, Mr. Schroeder’s career took off with calls coming in from Columbia Artists (Maureen McGovern & John Pizzarelli in Concert), Clark Terry (The QE2’s 17th Annual Floating Jazz Festival), & Ray Charles; a call that started a four and a half year relationship up until the singer’s untimely passing.

While maintaining an active schedule, Schroeder’s presence in the jazz community, both stateside and abroad, is felt not only in his intense musicality, but also in his outreach to the community as well. When asked about his flourishing career, Adam replied, “Clark Terry has not ONCE stopped reaching out to others, always taking the time out of his life to give, be it mentoring in music or in life. He instilled that in me from the moment we first met; that’s a lesson I’ll never forget and a lesson I strive to live up to each & every day of my musical life.”

A Handful of Stars

A Handful of Stars 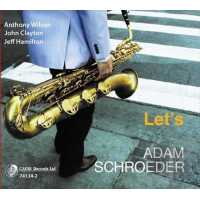 All About Jazz musician pages are maintained by musicians, publicists and trusted members like you. Interested? Tell us why you would like to improve the Adam Schroeder musician page.