Adi Meyerson Is An Israeli Raised Bassist And Composer.

She was born in San Francisco to American Parents. At the age of two, she relocated with her family to Jerusalem, Israel, where she grew up. Adi received her first musical training at the prestigious “Charles A. Smith Jerusalem high school of the arts” on bass guitar at the Age of 14. Three years later she came across the great Sonny Rollins record “Plus 4” and fell in love with jazz.

After graduating from high school, Adi started playing the upright bass in the search of a new sound that was more appropriate for Jazz. Three months later, Adi was accepted to the prominent collaborative program between “The Center of Jazz Studies (CJS)” at the Israel conservatory of music and “The New School for jazz and contemporary music”- a program which allows only twenty-five students a year to complete a BFA in Performing Arts given by the New School. There she had the Privilege to study and play with some of Israel's finest musicians such as Amit Golan, Amos Hoffman, Ofer Ganor, Danny Rosenfeld, Erez Bar Noy, Yuval Cohen and many others, as well as the opportunity to carry out the equivalent with international jazz legends such as Jimmy Cobb, Mulgrew Miller, Peter Bernstein and Eddie Henderson. While studying at CJS and living in Tel Aviv, Adi became one of the most on-demand musicians on the local jazz scene, playing in prestigious Venues like “Levontin 7”, “The Yellow Submarine”, “Shablul Jazz” and many others, as well as performing live on Israeli national television in the 2011 “Pre-Eurovision”. Between September 2011-August 2012 Adi was elected to be the house Bassist for the Israeli national “Cameri” theater's Award-winning production of the Musical “Cabaret”, which showed in Israel 160 times.

In August 2012 Adi moved To New York to continue her studies at “The New School for jazz and contemporary music”, where she graduated from in 2014. At the new school she received an opportunity to study with some of the great masters of the style such as Reggie Workman, Charles Tolliver, Kirk Nurock, Billy Harper, Bob Cranshaw and many more.

In a Brief period of 2 years, Adi has already started to make an impact on the NYC jazz scene and earn her title as an up and coming young talent. She has played with many local greats such as Helen Sung, EJ Strickland, Theo Hill, Wayne Escoffery, Bruce Edwards, Steve Carrington, Greg Bandy and Charli Persip around the NYC area in highly known venues such as Smalls jazz, Fat Cat, Arturo's, The Garage, The National jazz museum In harlem, Zinc Bar, The Hudson hotel, Dizzy's Coca Cola, Cleopatra's Needle, Webster Hall and others.

In April 2013 Adi traveled to Bern, Switzerland with the Cody Rowlands Quartet for a week-long engagement at the Bern International Jazz Festival.

Adi has worked with Bandleader and Drummer LaFrae Sci at Jazz at Lincoln Center, as part of the “Jazz For young people” program, preforming in schools around the NY area, and is currently working with “The Jazz Drama Program” Directed by Eli Yamin. Show less 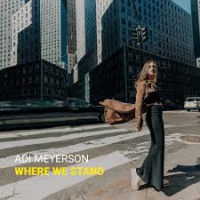 All About Jazz musician pages are maintained by musicians, publicists and trusted members like you. Interested? Tell us why you would like to improve the Adi Meyerson musician page.