Pianist and composer, Alan Blackman, has been a mainstay in the Washington D.C. and Baltimore area for nearly a decade. He has performed at Blues Alley, the Kennedy Center’s Millennium Stage, and nearly all of the area’s Jazz Festivals both as a freelancer and with his group the Blackman/Barke Quartet. This group was runner-up in the DCJazz.com international competition and the Takoma Park Jazz Brawl. Alan has taught the jazz combos at Towson University as well accompanied the Jazz Vocal Master Class. In addition he has given private lessons through Maryland Conservatory, Maryland Piano, and Howard Community College.

Alan has worked for The Platters, soul artist Darlene Love, and toured South America as Latin pop singer Milton Cortez’s keyboardist in 1993. His folk and Broadway skills were honed as pianist for both Karen Goldberg and national recording artist Jane Olivor.

Recently, he was awarded the eastern regional songwriting award by the Gospel Music Association and was selected to be part of the Betty Carter Jazz Ahead program at the Kennedy Center in D.C. Alan released his first CD of original music, Shadowdance, in January 2000 and is currently working on his first jazz composition book tentatively entitled, Changing Standards, which will be accompanied by an audio CD of his original arrangements.

”...there is some beauty here that is captivating...” Vibraphonist Joe Locke 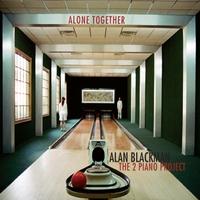 From: Alone Together: The 2 Piano...
By Alan Blackman

All About Jazz musician pages are maintained by musicians, publicists and trusted members like you. Interested? Tell us why you would like to improve the Alan Blackman musician page.