Alejandro Coello Calvo (born 25 July 1989 in León, Spain) is a Spanish percussionist and composer. Known for a rich diversity of genres and a delicate style, Alejandro has been illuming the percussion world both nationally and internationally. His works have been premiered in renowned venues such as Carnegie Hall in New York and the Berliner Philharmonie. He has been invited to perform, lecture, teach masterclasses and serve as jury in competitions by prestigious organizations from Asia, Latin America and Europe.​ His most recent project, the music album “One Minute Later” — a collaboration with Diego Barber, Eric Harland and Ben Williams — has just introduced him into the jazz scene. Currently he teaches at the University of Music Franz Liszt Weimar and runs an arts management, music and film production company Art Government which he co- founded.

Read more articles
”...is truly an artist. Serious, inspired and inspiring, with liveliness, fantasy and spontaneity...” NICOLAS PASQUET (Conductor) ”...besides his great soloistical appearances he is also a very gifted composer and collaborates with many exciting international musicians in different musical areas...”  MARKUS LEOSON (Percussionist) ”...as a composer I am impressed by his versatility, fearlessness and reach in spite of his youth...” DIEGO BARBER (Jazz Guitarrist and Composer) ”...his understanding of music goes far beyond percussion...” FERRAN CRUIXENT (Composer) 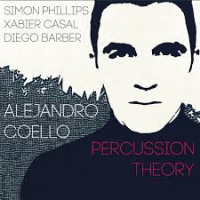 All About Jazz musician pages are maintained by musicians, publicists and trusted members like you. Interested? Tell us why you would like to improve the Alejandro Coello musician page.