Alicia Saldenha's unique sound can be described as funky soul with a twist of island sugar cane. A national of the Caribbean Republic of Trinidad and Tobago, she resides in Japan where she is a rising star in the independent soul music scene. In an environment notoriously difficult for “foreign artists” unsigned to major labels, Saldenha (pronounced sal-day-nya) is breaking down barriers between races, cultures and languages and is performing with top Japanese and international artists.

In addition to being a vocalist and composer, Alicia Saldenha's resumé includes a long list of experiences - as actress, dancer, scholar and university lecturer, having received a PhD from Kobe University, Japan in Culture and Civilization Studies.

Alicia Saldenha released her debut solo album of her original songs, “Dance with the Sun,” which she co-produced and which was recorded live in the studio in New York City, in June 2012. Not one to shy away from a challenge, Saldenha funded and released the album herself under her label, Jem Adar Music. It is produced by Andrew Felluss of Radian Records. The first single, “Ooh Boy,” has been released online, along with a music video by feature-film director, Zak Baney.

Alicia Saldenha is also the featured vocalist on the indigo jam unit album, “Rose,” released on September 2nd, 2011 by Basis Records. A successful CD release tour of Japan featured sold-out performances at Billboard Live Osaka. The album spent several weeks in the Billboard Japan Top 100 Chart for Independent Albums. Before this she also performed with the legendary Paul Jackson of Herbie Hancock and the Headhunters.

A humanitarian as well, Alicia Saldenha founded Freedom Fest Japan in 2013 in order to pay tribute to the late Nelson Mandela, former President of South Africa, freedom fighter and human rights activist. The festival comprised a string of events held in Kansai, from art exhibitions to live music concerts, all based on the themes of “Peace,” “Freedom” and “Social Justice.” Show less

““Ooh Boy” has a sweetly romantic quality, and Saldenha favors a sweet vocal style that makes this type of song perfect for her.” (Alex Henderson - ReviewYou.com)

“One thing that Saldenha is good at is hitting the high notes, and when she does that, she can sound a bit like Deniece Williams (a well known R&B singer who was big in the late 1970s and 1980s and enjoyed some major hits back then).” (Alex Henderson - ReviewYou.com) 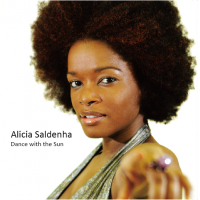 Dance with the Sun

All About Jazz musician pages are maintained by musicians, publicists and trusted members like you. Interested? Tell us why you would like to improve the Alicia Saldenha musician page.