When one feels deep passion for creating art, keeping such fervor alive isn't a question; it's an absolute must. Singer/songwriter Aline Vida knows this, for expressing herself in song is a natural part of her everyday life.

This current Seattle, Washington resident spent much of her formidable years moving around the West Coast with her family, spending time in southern California and Arizona. Aline says she was just a toddler when she found her voice.

“My parents used to record me on cassette tape when I was a baby,” Aline explains. “And once, my mom was singing 'You Light Up My Life.' I just started singing, and eventually I noticed that I received a lot of positive feedback. Singing just felt natural to me. It was my calling.”

While many think they have the chops to make their music dream a reality, doing the hard work is sometimes too much to take. But for Aline – whose striking vocals can easily ebb and flow within the expansive spectrums of rock, jazz, and R&B – her journey is a true labor of love. She graduated with a Dramatic Arts degree from Los Angeles' American Academy of Dramatic Arts, where she honed her craft under the likes of vocal coach John Peck. Later, she immersed herself in the City of Angels' ever-changing music scene, performing at Les Deux Café, and Drai's Hollywood. She would often perform during breaks for jazz/blues star Barbara Morrison, and sit in with bassist Leroy Ball and the Do Got Band.

“People like Hugh Hefner and Natalie Cole would be there,” Aline says. “It's crazy because if you screwed up, you did it in front of people in the business. It was a great learning experience for me.”

Upon attending the annual MIDEM tradeshow (Marché International du Disque et de l'Edition Musical) in Cannes years later, Aline found herself drawn toward international waters, and eventually landed in Sweden for a couple years. “I realized that it was one of the few places in Europe where you could sing in English,” she says. While there, she continued to work with local musicians while also making a name for herself performing at Stockholm's Mosebacke club.

And soon enough, New York City would be calling her name. With a yearning to reconnect with her American roots while being a bit closer to home, Aline spent a decade in the city, becoming a mainstay at gay clubs like O.W. Bar and Hannah's. Additionally, she joined blues legend, Sweet Georgia Brown, for various gigs at B.B. King's Blues Club in Times Square, as well as the famed Harlem jazz club, Lenox Lounge. Bo Diddley's longtime musical director, guitarist/composer Jim Satten would regularly invite Aline on stage to sing.

She could also be found crooning various R&B hits and the like during open mic nights on the Upper West Side at Ashford & Simpson's Sugar Bar. Music veterans such as Freddie Jackson, as well as the late Nick Ashford, and Valerie Simpson would be in attendance. And during this period, Aline self-released her debut LP, Visible, via CD Baby.

After years of traveling the globe and singing her heart out, Aline now resides in the Seattle suburbs, where she has put the final touches to her long-awaited sophomore studio album, And Now. With the loss of her aunt from cancer in 2012, she was ready to have an even closer family connection and such themes can be heard throughout the 10- song collection.

“When I was in Europe, I realized if anything ever happened to my mother or myself, you can't really help when you're across the country,” Aline elaborates. “These songs all come from life experience; love, family and anything that makes me feel intense emotions. I think all artists are emotional, but I definitely am. Writing and performing for me is really therapeutic.”

From the sultry riffage of “Secrets and Lies” and “At the Edge,” and the fierce confidence of “Impulsive Love,” Aline reaches deep inside her soul to reveal the most intimate of feelings. “Make a Stand,” a lovely tribute to her late aunt, reflects on how a family regroups after loss. “Love Don't Ask” is a soulful rock stunner that captures Aline's multi- faceted voice, while the feel good vibes of “In Our Own Time” encourages one to embrace love without hesitation.

And Now was produced by Aline and her longtime songwriting partner, drummer Warren Grant, who she hails as a “great mentor.” “He's been great at making sure that what I'm working on gets finished and he really takes his time.” Guitarist Jason Green, guitarist Harold Davis Jr. (a.k.a. Fro), bass players Antwar Goodwin and Darren Lipper, keyboardist John Deley and vocalist Jay Stolar lend their talents.

And Now is available for purchase on Itunes

Singer-Songwriter Lead Vocalist Originals Voice Aline Vida Vocalist Seattle
”Aline Vida is truly the North West's power diva of Rock and Soul. The weight of her lyrics is matched to the strength of her voice, which combine to drive home the points she makes in a most unique way. And all done with power and grace!” Bubba Jones Editor & CEO ~ Critical Sun

“The songs on the album are from life experiences,” Vida said. “Life is emotional and that's where they come from

”Aline Vida is truly the North West's power diva of Rock and Soul. The weight of her lyrics is matched to the strength of her voice, which combine to drive home the points she makes in a most unique way. And all done with power and grace!” Bubba Jones Editor & CEO ~ Critical Sun

“The songs on the album are from life experiences,” Vida said. “Life is emotional and that's where they come from. It's soulful rock, but I do not like to box it in.” Gale Fiege ~ Everett Herald

”Aline Vida has crafted a powerful CD that can stand with the work of Joan Osborne, Macy Gray and pretty much anyone else you can think of. It really is THAT DAMN GOOD!!! Ron Taffi ~ KSER Radio 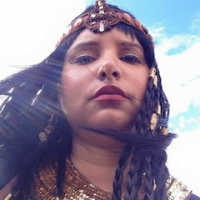 All About Jazz musician pages are maintained by musicians, publicists and trusted members like you. Interested? Tell us why you would like to improve the Aline Vida musician page.