Allison Au is an award-winning Canadian Saxophonist, Composer and Arranger. Leader of the Allison Au Quartet formed in 2009, Au’s debut album, “The Sky Was Pale Blue, then Grey” earned a Juno nomination in 2013, and her sophomore album “Forest Grove” seized the Juno for “Best Jazz Album of The Year: Group” in 2016. Born to a Chinese father and Jewish mother, and raised in the multicultural metropolis of Toronto, Allison was captivated by the unhinged freedom of Jazz in childhood. Her music evidences a mosaic of influences woven into a seamless and soulful sound, steeped in the tradition of Jazz but skillfully laced with elements of Classical, Pop, R&B/hip hop, Latin, and world music. ​ The Allison Au Quartet has toured extensively in Canada and the US. Winner of the 2017 Montreal Jazz Festival TD Grand Prix de Jazz, recipient of the 2017 Halifax Jazz Festival Sting Ray Rising Star Award, and a 2017 Finalist for Toronto Arts Foundation Emerging Jazz Artist Award, the group was also awarded the TD Jazz Fellowship Scholarship (2011), The Alfred and Phyllis Balm Scholarship (2012), and The Margareta and Benno Nigg Scholarship (2013) for three consecutive artist residencies at the Banff Centre. 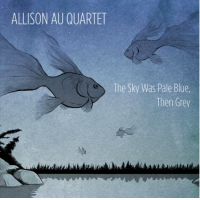 The Lie That Saves Us All

All About Jazz musician pages are maintained by musicians, publicists and trusted members like you. Interested? Tell us why you would like to improve the Allison Au musician page.