Allon Sams is a talented keyboardist gaining momentum in the contemporary smooth jazz format. He began playing the trumpet and french horn in his hometown of Tampa, Florida but the keyboards captured his heart and he set out to master his craft. Early endeavors had him traveling throughout the US, the Caribbean, Jamaica and Mexico with cover bands, followed by 3 months of solo performances all over Japan.

Upon returning to the US, Allon graduated from Full Sail Center for the Recording Arts and moved to Los Angeles after being offered an internship with jazz legend Joe Zawinul, garnering him invaluable experience as a studio technician. But diligence and perseverance propelled him on to work at other studios like Can Am, Clearlake Audio, Enterprise, and Paramount were he polished his studio savvy. One of which was Westlake Audio where he worked with members of Toto, film composer James Newton Howard, Vanessa Williams, Michael Jackson, and Richard Marx - just to name a few!

The vast experience in the studio environment helped Allon develop a fine tuned ear, and gave him the technical expertise he needed to continue working as an engineer. But the burning desire to play music was a powerful motivator for him to switch gears and start playing with local bands in the Los Angeles area. These included his own band as well as The Boxing Ghandis and a band comprised of former members of Tower of Power. He found success recording jingles for radio, television and film trailers and album projects from record companies such as Def Jam where Allon was invited to play keyboards for Montell Jordan’s multi-platinum hit “This Is How We Do It”.

While working as an assistant engineer on an HBO film project, Allon met producer/engineer Paul Brown. It wasn’t long before Paul called on Allon and his keyboard skills to collaborate for artists such as Peter White, Boney James, David Sanborn, Doug Cameron, John Klemmer and Gabriela Anders. One of the most notable was the song “Together Again”, which he co-wrote with Peter and was released as a single from his highly successful album “Caravan of Dreams”.

With the intensity of his desire to start a family and to create his own music growing increasingly stronger, Allon made the decision to move to Tampa Bay where he now has a strong following of fans who are as deeply passionate about him as they are about smooth jazz.

Accompanied by a full band with a diverse repertoire, Allon performs at Bay area jazz clubs, festivals and concerts. He has performed as an opening act for many artists including George Benson, Boney James, Rick Braun, Peter White, Regina Belle, Special EFX, Paul Taylor, Richard Elliot, Patti Austin, Brian Culbertson, David Sanborn, Fattburger and Najee. Allon’s 2nd album, “A Place In Time”, began it’s marketing campaign in the summer of 2001. The first spellbinding single “Time Alone” features Peter White and showcases a perfect musical partnering of piano and guitar! It was also selected to be included in the WSJT 94.1 CD Sampler Vol. 5, which was just released in the fall of 2003.

“A Place In Time” has received international recognition and has been included on many jazz radio shows including Café Jazz in Canada, Australia, Ukraine and most notably, Jazz FM in the United Kingdom. Radio talent and former host of Fusion Flavour, Steve Quirk, named “The Sun Will Shine” his #1 pick for 2001! “The Sun Will Shine” was selected to be included on Jazz FM’s compilation CD “Dreamin’”. Also “Feelin’ It” was included on another compilation from Jazz FM called “Venice Beach”. Allon has performed at several major Jazz festivals in Florida and has opened the 25th Anniversary of the Clearwater Jazz Holiday in October 2004 following the release of his 3rd CD “Music and Laughter”. WSJT has added the first track from that cd “Layin' It Down” to their rotation and is now in stores. In November of 2004 Allon went on tour with Peter White to England for over 2 weeks and played at sold out venues while being featured with his own music during Peter's show. When you listen to Allon's music - from the first song you know you’ve begun an emotional journey, and when you reach the end, you’re grateful your soul has met and merged with this awesome talent! Show less 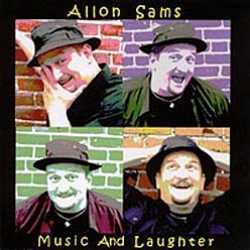 All About Jazz musician pages are maintained by musicians, publicists and trusted members like you. Interested? Tell us why you would like to improve the Allon Sams musician page.