Ally Fiola is a Nova Scotian saxophonist and screen composer. She is also the bandleader of the traditional jazz and funk- inspired combo, The Next Quest, which performs Ally’s original arrangements. Her upcoming solo album, Interblaze, is a culmination of the years she’s spent honing her craft, and showcases her newly-discovered artistic voice.

The work she creates highlights her affinity for soul, driving rhythms, and strong melodies. Ally has been inspired by artists such as Cannonball Adderley, Duke Ellington, Charles Mingus and Preservation Hall. These influences can be heard on her debut album, Dreaming Away, released in July 2018.

Dreaming Away was nominated for Jazz Recording of the Year at the 2019 Music Nova Scotia Awards, and Ally was nominated for Best Jazz Musician of the Year in 2019 for the local Halifax newspaper, The Coast. She was also awarded a placement in the 2019 Banff Centre Musician in Residence program where she worked with musicians from across the globe, including participating in masterclasses with the Quasar Saxophone Quartet.

The success of her debut album has granted Ally showcase opportunities on the jazz stage at the 2019 East Coast Music Awards and numerous performances at the Halifax Jazz Festival. Ally performs across Atlantic Canada with both her jazz combo and with other bands, notably having performed with the East Coast Music Award-nominated band, Unidentified Funk Object, and with jazz drummer legend Jerry Granelli.

For the past year, Ally lived in London, England, completing a Masters degree in Film Scoring. She had the opportunity to collaborate with diverse musicians and performed across London, including at the award-winning Pheasantry Jazz Club. Show less 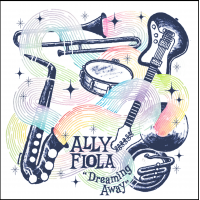 From: Dreaming Away
By Ally Fiola

From: Dreaming Away
By Ally Fiola

All About Jazz musician pages are maintained by musicians, publicists and trusted members like you. Interested? Tell us why you would like to improve the Ally Fiola musician page.