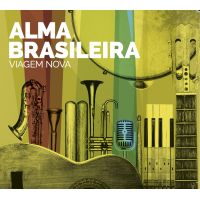 Alma Brasileira is a real journey. A joyful and surprising pilgrimage through Brazilian music, and a singular way of feeling this culture. The distinction of the sextet is reflected both in the choice of the repertoire and the delicacy of the arrangements, as well as in the talented performances of its members. They stroll along paths which have been opened by jazz, moving smoothly through improvisation, recreating themselves in the interaction of the musicians, and thus giving birth to an album which is alive. Edu Lobo (Casa Forte opens the album, with a firm declaration of intent), Moacir Santos, Carlos Lyra, Tom Jobim (Mojave, a rare and precious waltz), Chico Buarque (Chão de Esmeraldas, the first of the three vocal pieces of music, in the bright voice of Ramiro Pinheiro) - giants of composition are harmoniously accompanied by the works of Àlvar Monfort (Qué Te Voy a Contar, Olga, a samba-choro that sounds deeply familiar), Piero Cozzi (La Única, another samba, that carries scents of something a little more jazzy) and Ramiro Pinheiro (closing the album, the evocative baião Viagem Nova). In this exhibition of landscapes and rhythms there is, at the same time, an homogenous concept, a unity which breathes diversity, a varnish which gives it all a unique brightness. It is an album that resembles a journey, a Viagem Nova.

All About Jazz musician pages are maintained by musicians, publicists and trusted members like you. Interested? Tell us why you would like to improve the Alma Brasileira: Viagem Nova musician page.