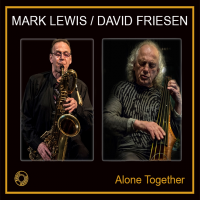 Veteran jazz masters Mark Lewis and David Friesen have recorded more than 100 albums between them, including two together (one on the Audio Daddio label, one on the Quartet label). The single “Alone Together” was recorded live at The Fremont in Seattle WA in December 2017. This recording is rare for a number of reasons: -It’s the first recording released of Mark Lewis on baritone saxophone, he’s most often heard on alto -David Friesen plays his own original music on recordings and in concert, almost never jazz standards -Mark Lewis typically records his own original music (more than 1,700 songs composed to date) -“Alone Together” is from the only night that was recorded at The Fremont during a six-month jazz series in a trendy neighborhood. - the club has since closed , a casualty of rising Seattle rents -The recording demonstrates master musicians improvising with what some might call unusual instrumentation – just baritone sax and bass -The performance combines an exquisite mix of technique, creativity and emotion – hallmarks of these musicians

All About Jazz musician pages are maintained by musicians, publicists and trusted members like you. Interested? Tell us why you would like to improve the Alone Together (Live Digital Single) musician page.