Starting out as a singer, Alton Purnell took up piano in his youth and became a professional musician in his mid-teens. He worked with a number of well-known bands in his home-town of New Orleans, including those led by Alphonse Picou and Big Eye Louis Nelson, before moving to New York in the mid-40s, where he played in various bands, including those led by Bunk Johnson and George Lewis, with whom he was best associated.

In the mid-50s he moved out to the west coast where he played with many leading New Orleans and Dixieland jazzmen such as Kid Ory, Teddy Buckner, Ben Pollack and Barney Bigard.

From the mid-60s onwards, Purnell toured extensively, sometimes in bands such as the Legends of Jazz, the Young Men Of New Orleans and Kid Thomas' band. He also toured as a soloist. A strong player who ably blended the traditional New Orleans style of piano playing with elements of Harlem stride, Purnell proved very popular well into the later years of his career. 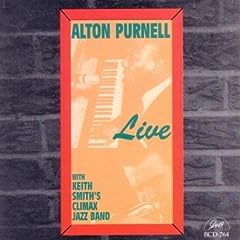 All About Jazz musician pages are maintained by musicians, publicists and trusted members like you. Interested? Tell us why you would like to improve the Alton Purnell musician page.