An Evening of Live Jazz 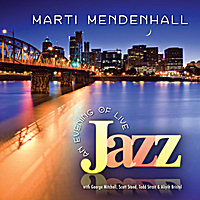 On October 29th, 2011, five amazing Jazz musicians took the stage for a benefit concert and the recording engineer captured it all in one single concert performance. The Halloween show was an absolute hit with the audience, as is evident by the hearty applause and Halloween fun that can be heard on this Live concert recording. This CD is the real deal without over-dubs commonly used in live recordings. "Marti assembled an outstanding group of supporting musicians. George Mitchell is a Portland native who has worked with Richie Cole, Sonny Stitt, Eddie Harris and Jon Hendricks. For the last two decades, he has been Diana Ross’ first-call pianist. Bassist Scott Steed has performed with Diane Schuur, Dawn Clement and Nancy King. Todd Strait was Karrin Allyson’s percussionist for many years, and he has performed on over 100 albums, including discs by Bill Charlap, Mike Metheny and Jay McShann. Together, these fine musicians offered a cohesive group sound behind Marti’s featured vocals. The creative team behind the final mix included recording engineer Steve Branson. Steve has a lengthy resume of audio mixing for live concerts and recordings. Steve has mixed for Sonny Rollins, Chick Corea, Don Cherry, toured with Dion and Donna Summer, Frankie Valli, Curtis Salgado and Robert Cray. Steve was the audio engineer who recorded the Grammy-nominated Robert Cray concert, Live From Across the Pond at the Royal Albert Hall.” - Tom Cunniffe This is Marti’s first CD as a leader, and it is a mark of her confidence that she opted to release a live concert as her debut album. Yet, the musical quality of the recording proves that she was right to do so. Let’s hope that this album marks the beginning of a bright career for Marti Mendenhall. Also featuring Aliyih Bristol on backup vocals.

Help improve the An Evening of Live Jazz page