Andrea Celeste was born in Pontedera on the 31st of August 1986. When only 11 years old she started giving her first public performances and took up the study of classical singing and piano under the guidance of M. Vittorio Scali.

Her talent did not pass unnoticed and she was invited, while still an adolescent, to share the stage with some of the most important national and international Gospel projects and singers such as the St. Jacob’s Gospel Choir directed by M. Massimo Bracci, the Joyful Angels directed by M. Vijay Pierallini, and the American singer Cheryl Porter. In 2002 Andrea won a scholarship for the International Gospel Seminar in Castelbrando where she shared the stage with Mario Biondi and Cheryl Porter.

A tireless professional, Andrea Celeste pursued her studies to improve her vocal technique and attended numerous workshops with Maestros such as: Terron Brooks, Ashley Davis, Huntley Brown, Michael and Regina Winans. At the same time Andrea was also very busy in the recording studios, lending her voice to various gospel, R&B, soul e jazz projects, and participating in mainstream events such as the Milano Gospel Festival for 3 years in succession (a dvd of the festival's greatest moments was distributed throughout Italy by the newspaper “Il Giornale”).

In July 2007, Andrea started work on her first solo album, “My Reflection”. Produced by Roberto Vigo and edited by Paolo Dughero’s Shake Records, the album is the long-awaited debut of this young talented artist who wrote the music and the lyrics of the songs and then entrusted them to such outstanding performers as Gianluca Tagliazucchi (piano), Dino Cerruti (double bass), and Rodolfo Cervetto (drums). This album also boasts the participation of some of the greatest names in Italian Jazz: Roberto Izzo, Stefano Cabrera, Marco Moro, Filippo Gambetta, the incomparable Dado Moroni (co-author of the song “Real”), Riccardo Fioravanti, Enzo Zirilli, Pietro Leveratto and Andrea Pozza. The result is a delicious jazz, dressed in velvet and embellished by the voice of this splendid artist and her innate capacity to balance, with rare elegance, mellow tones and extraordinary power. The album “My Reflection” has achieved critical acclaim around the world and Andrea Celeste has been compared to such artists as Anita Baker, Diana Krall and Eva Cassidy. High Note Records recently chose “The Power Of Our Love” as the opening track on their compilation album “Jazz Around Midnight” and the international company a-Peer has re-released the entire album for distribution in Taiwan, China, Hong Kong and Macao.

Andrea Celeste's refined style and unique vocals have allowed her to participate in important events such as Trussardi’s fashion show in Turin, Matteo Brancaleoni’s concert at the Blue Note in Milan and many private concerts, jazz festivals, and in clubs and theatres throughout Europe. She has also performed at the Monte Carlo Jazz Festival with the Alessandro Collina Trio alongside important stars such as Herbie Hancock, Marcus Miller, Raoul Midon and many others.

The year 2009 saw the release of the piano and voice album “Enter Eyes” with the internationally acclaimed jazz pianist Andrea Pozza. Produced by Roberto Vigo, the album contains songs from the jazz tradition like “Taking A Chance On Love” and “Black and Blue”, pop songs like The Beatles’ “Blackbird” and Stevie Wonder’s “All Is Fair In Love”, and a number of splendid new musical compositions by Andrea Pozza, like “Dancing Fog” and “I’ll Be There For You” with lyrics by Andrea Celeste. Show less

“An incredible vocalist, undoubtetly one of the best singers in Italy, Andrea Celeste has a truly enchanting voice and spirit.” Cheryl Porter

“A beautiful debut that caresses with an enchanting voice and delights with a classic-flavored reportoire.” Beat Magazine

“A simple debut album of class: like a dress this album fits her perfectly, celebrating and testifying her warm, soulful, deep and expressive voice.” Alessandra Spiezia - Il Corriere Fiorentino

“Andrea Celeste has an outstanding talent, her future promises to be filled with great music and great success.” Federico Armeni - Livecity 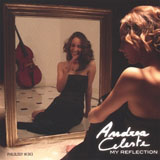 All About Jazz musician pages are maintained by musicians, publicists and trusted members like you. Interested? Tell us why you would like to improve the Reggie Buie musician page.