After his diploma in classical guitar at the Conservatorio “G.Verdi” in Como, he specialized in the use of the electric guitar in the contemporary repertoire.

He has played in the most important theatres and concert halls in Italy and abroad (the Teatro La Fenice in Venice, the Sala Verdi of the Conservatorio di Milano, the Auditorium at the Lingotto in Turin, the Auditorium RAI, the National Philarmonic Concert Hall in Warsaw, the Tonhalle in Zurich, the Schauspielhaus in Dresden, the Theatre in Nice, the Theaterhaus Pragsattel in Stuttgart, the Teatro Gavella in Zagabria, the Teatro Comunale in Bologna, the Teatro Ariosto in Reggio Emilia).

Within the Jazz scene, he got awarded with the 2nd Prize at the VI International Festival of Fiuggi's Guitar and boasts a long experience as a musician in clubs, working with many european and american musicians. 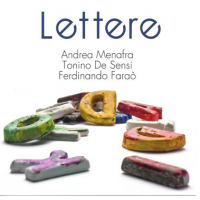 All About Jazz musician pages are maintained by musicians, publicists and trusted members like you. Interested? Tell us why you would like to improve the Andrea Menafra musician page.