Andrew Frankhouse picked up the saxophone at age 10, while growing up in the buzzing metropolis of Cedar Rapids, IA. He was fortunate to get his start in an exceptional public school music program, which gave him the opportunity to gain valuable experience playing in wind ensembles, big bands, pit orchestras, and stage bands. While living in Asheville, North Carolina he worked extensively with local and regional acts in jazz, jam band, funk, rock, and R&B contexts, playing all over the Southeast. He was also commissioned to write arrangements for swing fiddle legend Bobby Hicks in 2006 and 2007. He is currently active in the Boston area, performing with his own groups, and appearing with other artists in straight-ahead, latin, GB, and experimental settings.

Frankhouse’s first album with his trio, Gray/Slate/Yellow, was released in December, 2011. The ensemble includes outstanding Boston bassist Sean Farias and New York-based drummer Ignacio Rivas. Gray/Slate/Yellow features seven of Frankhouse’s compositions, each based on different relationships of color, time, tradition, space, and form. From the liner notes: “The music on this record is based on two unifying principles: 1) An improvising ensemble doesn’t need complex tunes, forms, or concepts to find its voice. 2) Freely improvised music doesn’t need to lack direction, purpose, or accessibility.”

In 2010, Andrew was hired to create a new 5-12th grade music program for the Innovation Academy Charter School in Tyngsboro, MA

. His work there has included creating new coursework in musicology, electronic music, and African American music, conducting high school musical productions, and laying the groundwork for school-wide vocal and instrumental performance programs. He is currently focused on creating and publishing curriculum for teaching musical analysis to non-musicians at the secondary level, using Systems Thinking/Systems Dynamics tools. Andrew also maintains a private studio, teaching saxophone, clarinet, flute, and jazz improvisation and currently teaches woodwinds and improvisation at the Nashua Community Music School in Nashua, NH. He is also currently offering Skype lessons in improvisation, using an innovative curriculum of his own design. Show less 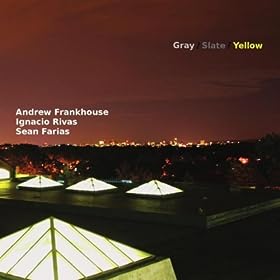 All About Jazz musician pages are maintained by musicians, publicists and trusted members like you. Interested? Tell us why you would like to improve the Andrew Frankhouse musician page.