Composer, author and bandleader Andy Jaffe recently retired from teaching in the Williams College Department of Music, where he founded the jazz program and was its Director for 30 years, as well as having served from 1999-2009 as Artistic Director of The Williamstown Jazz Festival, which he also founded.

Andy has been a leader in jazz pedagogy for forty years, having taught at the Berklee College of Music (1977-81); The Institut Musical de formation Professionelle in Nimes, France (1984); The University of Massachusetts, Amherst, Graduate program in Afro-American Music and Jazz (1994-98); Amherst College (1987-99); Tufts University (1991-93); Smith College (1997-99); The Tainan (Taiwan) National University of the Arts (2009 and 2014), as well as at Williams (since 1989), where, besides directing the Jazz ensembles until 2013, he taught courses jazz hear training, theory/improvisation, arranging/composition, on the music of Duke Ellington and John Coltrane, and the music of Brazil. In addition, he is a founding faculty member at The Vermont College of Fine Arts low residency Masters program in Music Composition and the Impact Music Program at the Taipei (Taiwan) Arts University (國立臺北藝術大學)Impact Music Program.

His most recent CD, entitled “Chorinhoso”, is a compilation of his original Brazilian influenced compositions released in 2020 on the Playscape Label, about which its Downbeat review said: “Jaffe’s orchestrations are lush and impeccably voiced…their harmonic weightiness is balanced by the ethereal lucidity of a rhythm section that understands Brazilian Music.” His penultimate effort, “Arc”, featured his original compositions and has received positive reviews and extensive airplay since its release in April 2016. Musicians on both efforts include the late Wallace Roney (Trumpet), Jimmy Greene and Kris Allen (Saxophones), John Clark (French Horn), Bruce Williamson (Soprano Saxophone and Bass Clarinet), the composer’s son (and protégé of Ron Carter) Marty Jaffe on Bass, Jonathan Barber on Drums, and on “Arc” the Interestring Quartet from Taipei.

(On “Chorinhoso” Rogério Boccato plays drums and percussion, and Avery Sharpe shares bass duties with Marty Jaffe). Listed among the “top 10” releases for April 2016 by David Adler of the New York Times, Downbeat praised “Arc” for its “graceful precision”, while All About Jazz’s Mark Carroto described it as “…flawless…”.

His numerous original compositions and arrangements are written for a wide range of instrumental ensembles and vocal ensembles, from piano solo and duo to works for Jazz Orchestra. Recent projects demonstrate his compositional versatility, and include a Suite for Jazz Orchestra dedicated to his late colleague Prof. Ernest Brown, entitled “Every Day Blues” (premiered by the Berkshire Symphony under the baton of Ronald Feldman in Nov. ’12), and a series of a cappella settings of Taiwanese aboriginal folksongs by the Taipei based “Okai Singers” (these and other pieces for big band, sextet, and piano duo may be heard at the public dropbox folder located on the homepage of www.AndyJaffe.com).

His 2004 release, “An Imperfect Storm”, featuring large ensemble compositions, was also reissued in 2011 on Parma Records. It includes Jaffe’s music as recorded by the Bill Lowe-Andy Jaffe Repertory Big Band, for which he has been principal arranger and musical director since 1986, and the Slovak Radio Orchestra and Big Band, featuring soloists Thomas Chapin, Tom McClung, Richard Stoltzman, Bruce Williamson, and Bob Weiner. His woodwind quintet was recently released on Darryl Harper’s most recent CD “The Need’s Got to be So Deep” (excerpts from the quintet may also be accessed via the public dropbox folder at www.AndyJaffe.com).

In 2015 his Sextet headlined the Taipei Jazz Festival and in 2017 his Nonet headlined the Easthampton Jazz Festival; and in 2009 he led his ensemble at the Toulon Jazz Festival in France. In 2001 he led an ensemble including Winard Harper (drums), Freddie Bryant (Guitar) and John Blake (violin), in a concert of his original music at the IAJE convention in New York, for which he was given an award for Outstanding Service to Jazz Education. In 2003 he premiered a three-movement double quartet entitled “Bridge” (for jazz Quartet and String Quartet) for saxophonist Branford Marsalis and his quartet, joined by The Ciompi Quartet and Tabla player Samir Chatterjee.

His 1996 text, “Jazz Harmony” (Advance Music; www.advancemusic.com ) is now in its Third Edition and is widely recognized as one of the most influential in its field. His most recent book, entitled “Something Borrowed, Something Blue”, was also published by Advance in 2011, and was the subject of his January 2005 presentation at the IAJE annual conference, held in Long Beach, California.

Later this year he will release an updated version of a fakebook of his original compositions. Show less 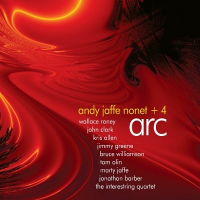 All About Jazz musician pages are maintained by musicians, publicists and trusted members like you. Interested? Tell us why you would like to improve the Andy Jaffe musician page.