In 1929, Kirk formed his band in Kansas City, and remained active until 1948. Their pianist, and the band's arranger, was Mary Lou Williams, who went on to become a prominent figure in her own right. Kirk’s was one of the earliest American bands to use the amplified guitar. One of the band's big hits was “Until The Real Thing Comes Along”, a song first heard in the 1932 Revue 'Rhapsody in Black'.

Andy was born and raised in Denver, CO. His teacher was Wilberforce Whiteman, father of Paul Whiteman. In 1921, Andy played tuba in George Morrison's Orch. in Denver, Colorado.

In 1925, he moved to Dallas, Texas, where he played (doubling on baritone and bass saxophones) with Terrence Holder's 'Dark Clouds of Joy' orchestra, and in 1928, Andy took over as leader of Holder's first orchestra, moving the band to Kansas City, MO, for an engagement at Kansas City's prestigious Pla-Mor Restaurant. Andy played Bass Sax and Mary Lou Williams was the Pianist-arranger- soloist, her husband, John Williams was on alto saxophone. Other members included violinist Claude Williams and trumpeter Edgar “Puddinghead” Battle. The band was now known as “Andy Kirk and his Twelve Clouds of Joy Orchestra”. During this period, he had such sidemen as: Ben Thigpen on drums, Howard McGhee, tenor saxophonist Dick Wilson, electric guitarist Floyd Smith, Harold “Shorty” Baker, Jimmy Forrest, Don Byas, “Fats” Navarro, and (briefly) Charlie Parker.

The 12 Clouds of Joy disbanded in 1948, following which, Andy went to California where he formed a new band, which disbanded in 1951. In 1952, Andy went to New York City, entering the real estate business, doing some part time gigs with pick-up groups. In 1958, he became manager of the Hotel Theresa, in New York City, and served as an official in the Musicians' Union.

Andy Kirk was an influential bandleader and his band produced a consistent and credible body of work. His discography approaches two hundred individual recordings, and is representative of the early style of Kansas City jazz. 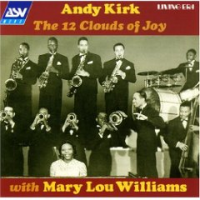 
The Best Of Andy Kirk

All About Jazz musician pages are maintained by musicians, publicists and trusted members like you. Interested? Tell us why you would like to improve the Andy Kirk musician page.