Flatted Fifths and Major Sevenths My Jazz Journey, for All About Jazz Website Serendipity seems to be the description of my jazz journey. As a teen gal dreaming that I’d be a rock star-fashion designer when I grew up, I never would have thought I would be a folk-jazz chanteuse. No relatives in either my German or Puerto-Rican side s of my families were musicians. I had a beautiful soprano 4-octaved voice but never had the inclination to play an instrument. When I came to know Christ as my Lord and savior in 1982, two twin sisters with beautiful voices invited me to harmonize and minister to the elderly and dying at many Jersey shore nursing homes.

In 1989. I met a handsome lead hard-rock guitarist named Chris who asked me to co front his Christian hard rock band. I was very shy, but God had given me a gift of confidence and we took the NJ shore by storm with our edgy, but intimately evangelical message. Several months later, I was hit by Lyme disease and endured two years of treatments and severe debilitation. Chris and my band disbanded, but I soon connected with two gifted musicians who soon became my best friends and song-writing partners. One, was a jazz-R&B drummer who created on a midi keyboard system. . Kyle loved my voice and compared me to Basia. I’d never heard of her, but soon bought several of her CDS and was hooked. Since the Lyme made me weak with Chronic Fatigue and frequent lung infections, and I couldn’t afford dining, my treat was having coffee and desert to see the Calabrese brothers at a Red Bank, NJ coffeehouse

. Older brother Mike on lead guitar and pianist, Dave improvised the most amazing music on the spot and throughout the night. I became good friends with them both and Mike was gracious in playing guitar for me on many live gigs. David and I had a close bond and he became my jazz mentor, teaching me the fine art of vocal improvisation. He also said I sounded like Joni Mitchel. After buying her album, Court and Spark, I was hooked on her haunting soprano. David and I became close and we ended up doing jazz gigs at local upscale jazz restaurants. Admiring patrons often complimented us on our beautiful vibe. David was a consummate artiste on his piano and I was humbled and deeply appreciative that he chose to work (and mentor) me. Both of us, though had challenging health issues which affected our relationship and we decided to create music separately. Several months later, music smiled on me again, this time in a chance meeting with a pony-tailed, handsome guy. My friend, Mom Winnie, noticed him and asked him if he played guitar. He was admiring some silver and turquoise jewelry in a boutique. He said yes and we were introduced. He wanted to know if I had any music and I invited him to join us at my car where I had copies of my debut CD, “I’ll Fly High”. He bought the CD/. When I arrived home to find Jeff’s raving message on my machine. He was fawning over my beautiful voice. When I called to thank him for his kindness, he said I should be accompanying my own self on the guitar and he was going to teach me how to play. True to his word, a week later he came to my house, taught me how to hold a guitar, showed the finger positions of a few basic chords and told me to get comfortable with it and play it every day! I was in love and composed my first folk original, Receive, from my second album, Asbury Park Angel. Playing the guitar set me free and I was exhilarated to explore different chords. I bought a jazz chord book and experimented with the different sounds and textures. My favorite chords were the major sevenths and flatted fifths. Two months later, I composed and record my first jazz-tinged folk-pop, Obituary. Jeff was blown away at my progress. Then came Basket case. Jeff took me out to shop for my own guitar and I ended up purchasing an exquisite Taylor model 218C which had her own special anointing for melodic songs! That was in 2006. I continued to desire musical exploration with all the improvising, recording and performing. My Taylor and I were inseparable and I was amazed how beautiful she always sounded and rarely went out of tune. Chris and I connected again and I asked him to collaborate with me on my third album, One Small Warrior/Devotion, a jazz-folk collection dedicated to my Jesus Christ. He was also so impressed with my improving guitar skills that he asked to do some cover gigs with him! My jazz journey was about to end due to being suddenly hit with another daunting health condition, a neurological movement disorder, TMJ-Platysma Dystonia) in 2007. I was in the midst of recording Mod Prophet with Chris and other innovative musicians, but the mouth-jaw seizures did a number on me. My forward creative momentum slowed drastically and recording projects came to a snails pace. I also was unable to do live gigs. With Mod Prophet on hold, I relied heavily on my faith in the Lord and that reliance inspired songs of courage and adoration. I felt led to start recording my second sacred album, The Anointing, His presence. It was also recorded and produced at a snail’s pace, but was released in summer of 2007. I believe my victory in overcoming such a debilitating and exhausting condition will bring an even more compelling and empathetic delivery to my music. God has a miraculous way of bringing beauty out of ashes and my forthcoming music will indeed be a conduit of healing, grace and joy. Before the first songs of the Anointing were recorded, I was in the midst of recording my Jazz-hard rock album, Mod Prophet, which had to be postponed. I felt God impressing me to record and share my journey-battle with Dystonia through Psalms songs and messages of adoration and faith in Him. I had to prioritize according to my recording budget. God willing, I plan to release Mod Prophet in the spring, with only two songs left to complete the project. Show less 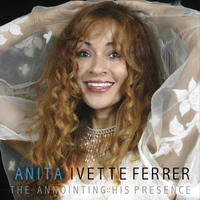 All About Jazz musician pages are maintained by musicians, publicists and trusted members like you. Interested? Tell us why you would like to improve the Anita Ivette Ferrer musician page.