Anke Helfrich studied in Hilversum/Netherland and in New York, where she had lessons with Kenny Barron and Larry Goldings. In 2000 her debutalbum “You'll see” with Johannes Weidenmueller (b), Jochen Rueckert (dr), feat. Mark Turner (ts) was proposed for the award of “German record critics”. Anke Helfrich got listed in a new edition of Kunzlers Jazzlexikon. Her CD “Better times ahead” with Martin Gjakonovski (b), Dejan Terzic (dr) and specialguest Roy Hargrove (trp) was released in 2006 and got great reviews all over Europe and the US and was also proposed for the award of “German record critics“. In 2007 she was playing at the Kennedy Center in Washington D.C. invited as a finalist of the M.L.Williams Competition. Anke Helfrich Trio was selected among others, to represent the German Jazz scene at the “Jazz Ahead” in Bremen in 2008. In 2009 her trio was playing at BMW World Jazz Award in Munich and her 3. CD “Stormproof” was released on ENJA Records (with Henning Sieverts (b), Dejan Terzic (dr) and Nils Wogram (trb). Together with the band of Manu Katché, her trio played a tour of 14 doublebill concerts all over Germany. Supported by the Goetheinstitut and the Federal Foreign Office, she played concerts with her band in Southafrica and Namibia. In 2010 Anke Helfrich played a tour with the Diva Jazz Orchestra from NYC, had concerts with her trio at festivals like JazzBaltica and did a CD recording with the Kyle Gregory Sextet in Udine/Italy. 2011 started with concerts in Istanbul and Stockholm (invited by trombonist Nils Landgren), followed by concerts in Germany, Italy and Mauritius. Helfrich played piano on a album of Swedish saxophonist Magnus Lindgren together with bass legend Palle Danielsson and drummer Jonas Holgerson and performed this music during the Stockholm Jazz Festival. She played with a great All Star Band together together with the Dallan Sinfoniettan, together with Peter Asplund, Lindgren, Rigmor Gustafsson and many others at Stockholms concert hall. Many concerts she played with her trio in Germany and Europe. She is a faculty member at the University of music and performing arts in Mannheim and at Dr. Hoch's Conservatory in Frankfurt/Main and teaching at workshops in and outside of Germany.

On Oct. 30, 2015 she released her 4th CD as a leader on ENJA Records. “Dedication” was recorded in NY together with trumpeter Tim Hagans, Martin Wind on bass and Jonas Burgwinkel on drums.

Jazzpodium: - ..one of Europeans best female pianists is back. - ..”Dedication”presents European top level.

Jazzthetik: -The CD is a thunderclap, a hymn to life.... - ..shows a matured musician with a strong personality and clear vision.. - Anke Helfrich deserves great praise for an album full of wit, surprising sound components and incredible depth, that doesn't leave you unaffected.

Jazzthing: -...stands for this out of the ordinary, sublim CD. - ..it is some of the best, German Jazz has to offer right now. 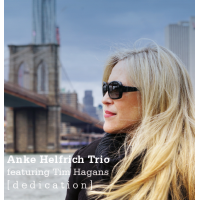 All About Jazz musician pages are maintained by musicians, publicists and trusted members like you. Interested? Tell us why you would like to improve the Anke Helfrich musician page.