Antonio Marrone is an italian musician, he was born in Italy in 1978. At the age of 14, he starts playing bass guitar with his cousin, Max Leggieri (Clap Rules), who gave him the very first rock and jazz basis. Very keen on contemporary music, Antonio starts to experience his own style, performing with bands and musicians. He studied with many private teachers and attended several master classes ...with musicians from all over the world: Paul Bollenback, Jeff Richman, John Stowell, Roy Patterson, Steve Trovato, Jamie Findlay, Royce Campbell, Scott Henderson, David Friesen, Vic Juris, Jimmy Bruno, Bob Ferrazza and many others… In 2006 he moved in London, where he worked as a demonstrator for Mark Bass in “London Guitar Show” and also played with many artists in UK. In 2008, after having met Gianfranco Continenza, he moved back to Pescara, focusing his attention to the modern jazz theory and practice at the C.M.A. (Contemporary Music Academy), located in Pescara. In 2009 he recorded an album, named “Absence Upon a Ground”, for Subtilor, written by a classical contemporary composer Michele Epifani. He is sponsored by “Meridian Guitars”, with “Antonio Marrone Signature Bass”. In 2012, he realesed his first album as a leader “Solemn I”, with Cristian Caprarese on Piano Rhodes, Keys and Daniele Di Pentima on Drums. Antonio also had the pleasure to play with: Gianfranco Continenza, Marco Galiffa, John Crawford, Cristian Caprarese, Daniele Di Pentima, Bob Ferrazza, Ola Onabule, Ben McDonnell, Tomash Zyrmont, Guillermo Hill, Luca Nostro, Nicola Angelucci, Max Ionata, Massimo Manzi…etc. 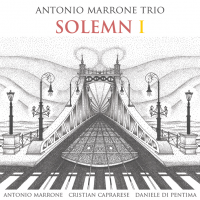 From: Solemn I
By Antonio Marrone

All About Jazz musician pages are maintained by musicians, publicists and trusted members like you. Interested? Tell us why you would like to improve the Antonio Marrone musician page.