Home » Musicians » Discography » Are You Ready 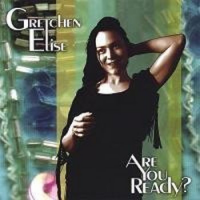 Are You Ready?; He is Ready; Chimes at Echigoyuzawa; Looking Down; Diamonds; Sound FX; Good Morning Moon; Bonus Track (He is Ready A Capella)

Described as a "signature blend of jazz, hip hop and soul," this original debut launched Gretchen Elise on the jazz, world and alternative soul music scenes of Boston, and later, her hometown Philadelphia and internationally. Luscious arrangements, light Brazilian-flavored vocal layers, horns and marimba from Boston’s best players make this album endlessly interesting and beautiful. One fan brought the CD on a trip and listened 200 times and "didn't get bored." Kicking off with an acoustic reggaeton featuring Boston based reggae singer Lady Lee, this album is an auspicious launch for this multi-genre artist.

Help improve the Are You Ready page

All About Jazz musician pages are maintained by musicians, publicists and trusted members like you. Interested? Tell us why you would like to improve the Are You Ready musician page.