Bassist, Composer, Arranger, Bandleader
It was an early start for the musically inclined 4 year old. As a toddler, Arlington Houston Jr. was encouraged by his father to practice and experiment with different musical instruments including the drums, guitar, bass, and organ. Although not musically inclined themselves, Arlington’s mother and father shared a great passion for Soul and R&B. It was in his childhood home in Richmond, CA where Arlington grew up listening to James Brown, Otis Redding, Sam & Dave, Marvin Gaye, Aretha Franklin, Gladys Knight and the Pips, The O’Jays, Roberta Flack, Curtis Mayfield, Bill Withers, Dionne Warwick, Al Green, The Temptations and Isaac Hayes to name a few. On Sundays Arlington’s grandmother took him to church where he was exposed to gospel music. He would often imitate the music he heard, and it was apparent the kid had talent.

Arlington attended Salesian High School in Richmond, CA where he played football and ran track. As a teen he already knew that he wanted to play the bass and become a musician. Further parental encouragement came when his mother bought him a Fender bass and private lessons at a local music store. During this time he started listening to funk and jazz fusion music and playing with other young musicians.

Following high school, Arlington pursued his dream to become a professional bassist. In 1981, he enrolled at the College of Marin in Kentfield, CA where he studied classical music for two years. It was there he began playing the acoustic bass in the college orchestra and the electric bass in jazz ensemble. Arlington was big into jazz fusion at that time he was eager to follow in the footsteps of his bass heroes like Stanley Clark, Byron Miller, Louis Johnson Marcus Miller, and Jaco Pastorius. Ralph Armstrong, Nathan East, Jimmy Haslip, Danny Wilson, Randy Jackson, Darryl Jones, and Victor Bailey. Arlington easily connected with other passionate musicians and began performing with them around Marin County. After college, he studied with Herbie Lewis and Stephen Tomontozzi in the Bay Area, and spent a lot of time with good friend and bassist Peter Washington. Today Arlington is still inspired by greats like Ray Brown, Ron Carter, Paul Chambers, Charles Mingus, Doug Watkins, Oscar Petiford, Jimmy Blanton, Buster Williams, Bob Cranshaw, Ray Drummond, Gary Peacock and Eddie Gomez.

Arlington spent time in Boston playing in a local symphony orchestra and working with top 40 bands and small jazz groups. During the summer break in 1986 he took a trip to New York City and stayed with bassist Lincoln Goines. While in New York Arlington met Dave Valentin and Tania Maria.

Arlington left Berkelee in 1987 and returned home to pursue freelancing with Bay Area musicians. In 1988, Arlington landed a gig with legendary sax man John Handy and performed extensively with him and his group Class. He recorded his first record with John Handy in 1989 entitled “Center Piece” on Milestone Records. He also freelanced with musicians Al Tanner, Jules Broussard, Calvin Keys, Faye Carol, David Hardeman, Jeff Narell, E.W. Wainwright, Bill Bell, and Terrell Prude. Meanwhile Arlington continued to play with many top 40 and R&B bands and sat in with Dave Valentin during several of his Bay Area engagements. In 1991, he played in several project bands including his own the Arlington Houston Quintet (traditional contemporary jazz), and Alphabet Soup (hip-hop funk band). In 1993 he recorded a CD with the group Pan Ramajay (steel drum band) entitled Pan Ramajay. Arlington taught music with The Soma Quartet (chamber jazz), for The San Francisco Symphony “Adventures in Music Program” from 1992 to 1993. Later in 1993, Arlington performed in the theatre production of Bessie’s Blues, the music of Bessie Smith, at Oakland’s Alice Art’s Theatre. His Trio also has a cameo appearance in the independent film Jujuluv. Arlington continues to perform at many clubs, concerts and festivals. He and his wife, Lynn, live in Oakland, CA. For more information visit www.arlingtonhouston.com and take a listen to “Cool Casual” Arlington’s latest CD…it’s contagious. Show less 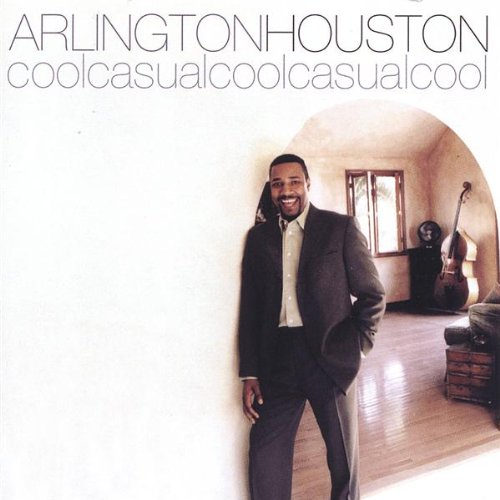 All About Jazz musician pages are maintained by musicians, publicists and trusted members like you. Interested? Tell us why you would like to improve the Arlington Houston musician page.