ARUN SHENOY is a GRAMMY® Award nominated composer and record producer. Based in Singapore and also a California resident, his versatile production style spans genres as wide as rock and funk, to jazz and world music. Arun writes and produces music released as solo productions under his own name, as well as for other bands and solo artists. He is the founder and CEO of publishing firm Arun Shenoy Music Publishing (BMI) and record label Narked Records.

Shenoy has also collaborated with a diverse range of artists and producers from Matthew Shell to Sridhar, and also released with Kulur and Duke an eponymous debut single as a trio under the moniker Soul’d. The music on “Soul’d” introduced the Bansuri Funk music to the world.

Shenoy has been featured twice in the best dressed list at the GRAMMY® Award red carpet arrivals, in 2014 by Zen Magazine and again in 2015 by Le Guide Noir.

A STAGEY BANK AFFAIR marks ARUN SHENOY’s first album in 4 years and a follow up to his critically acclaimed GRAMMY®-nominated debut Rumbadoodle. The highly anticipated concept album is Shenoy’s first collaboration with THE GROOVE PROJECT, a musical supergroup of Shenoy’s long term collaborators.

The Contemporary Instrumental album presents an immersive audiovisual experience of the Bansuri Funk Music, Artwork, Animation, Liners and Physical Packaging. Bansuri Funk is a sound stylized by the fusion of Funk, Jazz and Rock with a spicy hint of Worldly Pleasures, the latter being a reference to the blazing performance on the traditional Bansuri by acclaimed flautist Ravichandra Kulur.

Shenoy is a Breedlove artist, a showcase artist of SONY for their audio production suite, and endorses PreSonus, the premier American manufacturer of live and studio sound equipment.

"A Stagey Bank Affair" By Grammy-Nominee Arun Shenoy Unleashes Its... 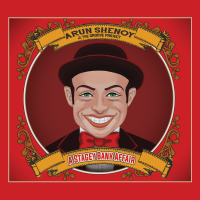 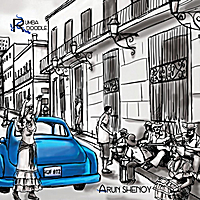 From: A Stagey Bank Affair
By Arun Shenoy

All About Jazz musician pages are maintained by musicians, publicists and trusted members like you. Interested? Tell us why you would like to improve the Arun Shenoy musician page.