Home » Musicians » Discography » As Above So Below

As Above So Below 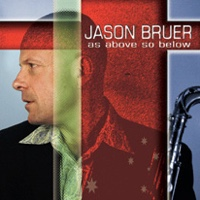 Years of experience and enjoyment from a quarter-of-a-century-long musical journey have culminated into Jason Bruer's highly anticipated debut solo album, AS ABOVE SO BELOW. Featuring alongside Jason are special guests Dale Barlow (flute), Mark Johns (guitars), Fabian Hevia (drums/percussion), Martin Love (keyboards) and Adam Ventoura (bass) amongst others. The album richly displays Jason's sublime compositions as one of Australia's most accomplished and sought after saxophonists. Jason has played with and arranged for a veritable Who's Who of the music business including Eric Clapton, Sting, Mick Hucknell, Mica Paris, BB King, Stevie Winwood, Madness, Paul Weller, All Saints, Van Morrison, Jools Holland and Lulu to name but a few. Although a sought after sideman, Jason made his legend by playing his original sax compositions with a dazzling technical prowess and freedom. AS ABOVE SO BELOW is an instrumental delight which displays the breadth and depth of Jason Bruer's original compositions and musical influences ranging from Brazilian jazz to North American folk all the way to New York funk.

Recording Self Produced As Above So Below Jason Bruer

Help improve the As Above So Below page

All About Jazz musician pages are maintained by musicians, publicists and trusted members like you. Interested? Tell us why you would like to improve the As Above So Below musician page.