Attila Gyárfás (1990) is a Hungarian drummer, composer, and improvisor, who has appeared on over 20 records and has performed at a great number of major venues and festivals all over Europe, such as the Bimhuis in Amsterdam, the Palace of Arts in Budapest, and the Porgy & Bess in Vienna. As member of various groups, he has won several awards, including the European Young Artists' Jazz Award Burghausen 2017 and the Keep an Eye - The Records in 2015. He graduated at the Royal Conservatory of the Hague with Cum Laude honours, and he earned his master’s degree at the Conservatory of Amsterdam. Besides leading the Attila Gyárfás Trio, which released its first album entitled Cloud Factory in 2018, and co-leading the band Identified Flying Object (i.f.o), he is a member of the Filippo Vignato Trio, the Aron Talas Trio, the Gerhard Ornig Trio, and the Filippo Vignato Quartet. Attila is a proud endorser of Dream Cymbals and Gongs.

”Gyárfás’ subtle–and not so subtle–manipulations keep these pieces coherent while constantly in motion.” Karl Ackermann, All About Jazz 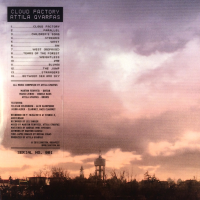 All About Jazz musician pages are maintained by musicians, publicists and trusted members like you. Interested? Tell us why you would like to improve the Attila Gyarfas musician page.