Mr. Rothbard was born in kibbutz Gan Schmuel in the country side of Israel , near the “Triangle”, an area of several arab and jewish villages. By the age of seven, Mr. Rothbard was relocated in Japan for three years with his parents and two sisters after the family was following his dad’s peruse of fish breeding technologies. After returning to the Kibbutz in 1977, Mr. Rothbard picked up his first musical instrument, the mandolin. But it was not before five years later that he finally picked up the Guitar as his main instrument. during his high school years. Mr. Rothbard records collection includes some of the finest Jazz guitarists such as George Benson,Kenny Burrell, Joe Pass Wes montgomery, Jim Hall, Pat Metheny and John Scofield. Later on he discovered the music of charlie Parker,Sonny Rollins, Hank Mobley, Lee Morgan and many other Horn players which later on will help him find his own guitar style. Although Mr. Rothbard was already being involved in most musical activities of his high school,it is not before he turned eighteen that he got his first professional gig.

After three years of mandatory service in the I.D.F , at the age of 21, Mr. Rothbard moved to Jerusalem where he performed with Boris Gamer, Avishai Cohen and Amikam Kimmelman. Those engagements were his first chance to participate in international venues such as Red Sea Festival and Tel Aviv Jazz and Blues Festival. It was an eye opening experience to see and hear Jazz Giants like Elvin Jones, Freddie Hubbard, George Coleman and Wayne Shorter that convinced Mr. Rothbard that he needed to peruse his Jazz research in the place where this music was born- The U.S.A . Mr. Rothbard arrived to New York in 1991 and stayed for a year. Although he had the chance to work with the pianist Uri Cain and the drummer-Jimmy Lovelace , he decided to return to Israel and accept a teaching position in Tel Aviv.

In 1995 Mr. Avi Rothbard relocated in Boston Mass., winning a scholarship to Berklee College of Music .Berklee was a great place to challenge his musical skills and until his graduation in 1998, he was performing constantly with various artists such as: John Thomas, Jeremy Pelt, Darren Barrett, Andy McGhee, John Lampkin and steve Neal, During his years in Berklee, Mr. Rothbard won The Jimmy Hendrix Award, Boston Jazz Society Award and The William Leavitt Achievement Award. These grants are considered as the most prestigious awards of the Berklee Guitar Department that includes approximately 1200 students annually. Mr. Rothbard has been teaching at the annual Berklee Guitar Sessions and has been a member of the faculty since the year of 2000.

Mr. Rothbard has made his mark on the New York Jazz Scene after being a resident in Sugar Hill, Harlem, New York from 1999 until 2004. He performed in local clubs such as Saint Nicks, Lenox Lounge and Showman's,Fat Cat, Smalls and Smoke with various veterans, which the most notable are Bill Saxton, Bobby Forrester, Preacher Robins and Max Lucas. Mr. Rothbard also shared the band stand with ,Grant Stewart, Ali Jackson, Joe Magnarelli,Jeremy Pelt, Carolyn Leonhart, Ben Dixon, John Thomas, Greg Band and Dave Gibson.

Mr. Rothbard’s first release on Midlantic label- “Going Somewhere” had been one of the favorite records by the NPR’s Jazz Chart and stayed in The Jazz Week Charts for 12 week. His Second release on the label, “Twin Song”, is a follow up recording of his Organ trio. on his new CD, he is also joined by his long time colleague- Wayne Escoffery on Saxophone. Show less

Avi Rothbard Plays Solo Guitar Every Wednesday at the Ethiopiann... 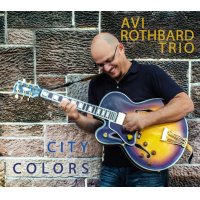 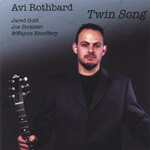 All About Jazz musician pages are maintained by musicians, publicists and trusted members like you. Interested? Tell us why you would like to improve the Avi Rothbard musician page.