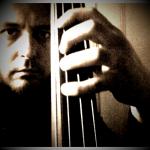 Ariel de la Portilla was born in the city of Matanzas, Cuba where he lived until immigrating with his parents to the United States in September of 1980. He was raised in the southwest area of Miami, Florida. The neighborhood better known as “little Havana”. Growing up surrounded by the sounds of Cuban and Brazilian music as well as simultaneously experiencing American music and culture gave his childhood a distinctly unique dichotomy that later proved to have become a crucial aspect of his life education, and musical identity. After graduating from high school in 1994, Ariel left his home town of Miami Fl. to pursue his interests in the double bass. He was awarded a music scholarship to the Cincinnati Conservatory of Music at the University of Cincinnati where he dedicated most of his time to studying classical bass and jazz. He remained at CCM until recruited by the University of Miami in Miami Fl. in 1996 to study under the instruction of Don Coffman, Matt Bonnelli and Lucas Drew. Since arriving in New York City, Ariel has had the privilege of performing with an eclectic list of artists from the jazz and Latin jazz genres including ray Vega, Dave Valentin, Patato Valdez, Candido Camero, Edy Martinez, Willie Martinez, Peter Erskine, Eddie Daniels, Sonny Bravo. Currently he is a member of the Ze Luis Quartet and a new conceptual guitar trio: Lengua Moderna.

Perfromance/Clinic and presentation on developement of Latin jazz and the culture similarities linking multiple styles of music from Brazil, Cuba and the United States.

All About Jazz musician pages are maintained by musicians, publicists and trusted members like you. Interested? Tell us why you would like to improve the Ariel de la Portilla musician page.