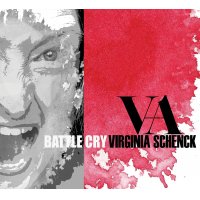 “I consider myself a messenger,” says vocal artist and social justice champion Virginia Schenck, who adopted the moniker “VA,” bestowed upon her by an Atlanta DJ from WCLK 91.9FM a few years ago. “What I sing matters. What I say matters. I see myself as a peacemaker and networker, someone who weaves worlds and people together. In 2016, my vision changed.”

VA literally has advocacy and activism in her DNA. Her grandmother, a suffragette in Philadelphia, was pregnant with her mother while campaigning for the right of women to vote in the 1920s. In 2016, the election of a new President signaled the crossing of a threshold, a call to emotional and intellectual arms, which prompted in VA a renewed commitment to combatting a surge of regressive politicking, divisive inequities, and racial friction.

“I thought we already had gone through this and done so much positive work,” VA says. “Instead, my eyes were opened to a shadow side of America from which a backlash emerged. Our democracy, liberty and freedom were being challenged. I was flabbergasted and could not keep quiet.”

VA’s response to that challenge, Battle Cry, will be heard.

Battle Cry is a powerful salvo, which packs the explosive authority of an artist who, in 2018, co-led a pilgrimage to the Smithsonian National Museum of African American History and Culture with Rev. Kimberly Jackson, an ordained LGBTQ+ Episcopal priest and candidate for the Georgia Senate in 2020, and Dr. Catherine Meeks, executive director of the Absalom Jones Center for Racial Healing.

On Battle Cry, VA fires off familiar songs, such as Donny Hathaway’s “Sackful of Dreams,” Dion’s “Abraham, Martin and John” and “Bali Hai” from the Rodgers and Hammerstein musical South Pacific, with precisely targeted interpretation, imaginative improvisation, swing and soul. Her evocative renderings of “America the Beautiful” and “The Pledge of Allegiance” prompt fresh evaluation of time-honored symbols of national pride. A harrowing version of “Strange Fruit,” sung in wailing, dissonant passages, honors and embellishes the protest song immortalized by Billie Holiday with wrenching poignancy, made all the more potent by Jordan’s deeply rooted bass and Williams’ spine-tingling sax accompaniment.

Then there is “Hear My Battle Cry.” Propelled by a disarmingly bright, deliciously funky groove, the album’s one original song delivers the singer’s bullseye message: Can we find the path to freedom by the truth in our lives/Find the courage, strength and hope to stand tall/Resurrect ourselves, correct ourselves, and pay our due/Hear my battle cry: I will live in truth or die.

“My music is my resistance,” says VA. “Battle Cry is my plea for us to step up to the plate and do what is right for this country, to make America a better place.”

All About Jazz musician pages are maintained by musicians, publicists and trusted members like you. Interested? Tell us why you would like to improve the Battle Cry musician page.