Possessing one of the most elegant baritone voices ever, Rock & Roll Hall of Fame alumnus Ben E. King’s imprint on the musical landscape is so indelible that an optimum barometer has been set for countless aspiring performers. From a youngster in Harlem to an embraceable solo artist, Ben E. King’s contributions to the pop music spectrum are incalculable.

Born Benjamin Earl Nelson, in Henderson, North Carolina, young Ben’s family relocated to New York City when he was at the tender age of nine. While attending Jr. High School, he discovered a unique talent: singing harmony in a group with other gifted youngsters. Little did precocious Ben realize that these after school, impromptu doo-wop sessions were mere tune-ups for a dynamic musical career that would exceed his wildest dreams, span decades, and enchant millions of music aficionados the world over. Benny’s precocious young group became known as The Four B’s and earned the reputation of being one of the finest young acts in the area. One evening, while competing against other aspiring acts at the world-renowned Apollo Theater, their sacrifice and success was handsomely rewarded as they walked away with a prized second place finish!

In 1958 Ben reached the big-time as a member of the Five Crowns, a local group that opened shows for well- known groups. In that same year they were privileged to open an Apollo Theater concert for the most popular R&B group in the world, The Drifters. Because of the departure of their popular lead singer, then manager George Treadwell sensed a colossal vacuum and staleness in the group. His solution? Replace the whole Drifters group with members of the graceful Five Crowns! That daring move would open the door for Ben to sing lead for the greatest R&B group at that time and create full exposure for his musical compositions. Their first recording in 1959 was Atlantic Records’ trend-setting smash-hit titled “There Goes My Baby”; that ballad (which Ben co-wrote with Jerry Leiber & Mike Stoller) distinguished The Drifters as the first popular group to feature strings (violins) on major musical recordings.

As a member of The Drifters, Ben sang lead on such chart-stoppers as “Dance With Me,” This Magic Moment,” “Save The Last Dance,” and “I Count The Tears.” In 1960, and in the midst of unimaginable success as a Drifter, Ben made the decision to aim even higher by pursuing a lifelong dream ¯ to choose and perform many of his own tunes as a solo artist. This also called for Ben to create a stage name to distinguish the solo artist from the Drifter. By shortening his original name, by using his middle initial, and by displacing his last name, he now became known universally as Ben E. King.

In 1961, as Ben E. King the icon that the world has come to cherish, his first hit was one that even the Queen of Soul was moved to cover, the magnificent “Spanish Harlem.” But his second heart-melting single, “Stand By Me,” reached gargantuan proportions. That # 1 R&B hit and top five pop jam (written by Ben E. King, Leiber and Stoller) has been sung or covered by almost everyone who ever walked into a recording studio. Why, even Hollywood film-director Rob Reiner was inspired to select  “Stand By Me” as the title for his 1986 feature film and sound score by the same title. During that same period “Stand By Me” was re-released as a single, rose to the top ten in the US, and rocketed to the # 1 spot in the UK.

In 1962 Ben E. King’s hits kept coming: “Don’t Play That Song” became another commercial success and was complimented by “I Who Have Nothing” and the Latin- flavored “Amor.”

With quite a musical track record already established by the early 60s, Ben E. King seemed to be unstoppable. However, the English, who had been studying and rehearsing R&B and early rock sounds of America for nearly a decade, were finally ready to export the very music that inspired them back to its creators. As King once remarked, “The British launched the greatest entertainment promotional campaign ever. They took our music and sold it back to us!” But despite invading America with countless bands imitating the great blues, R&B, and rock groups of the day with watered-down versions of the same music, artists like the incomparable Ben E. King continued to weather the Trans-Atlantic storm. And if that wasn’t enough to contend with, disco, as if rising from the dead and sporting simplistic, up- tempo, and mostly rhythmic reiterations, saturated the airwaves across the nation and around the globe. Yet, despite all of this, compromise was never a consideration with Ben E. King, as the balladeer remained true to his music and loyal to his devoted following.

While performing in Miami in 1975, head of Atlantic records, Ahmet Ertegun, caught one of King’s dazzling shows. He was so impressed that he encouraged King to re-sign with Atlantic Records. King acquiesced, and the result of this reunion was a # 1 on R&B charts and a top 5 on pop with the funk-laced groove titled “Supernatural Thing, Part 1.” Ertegun said recently of King: “Ben E. King is one of the greatest singers in the history of rock and Roll and rhythm and blues. His style and the tempo of his voice have a magic all their own. I’m sure his fans all over the world will relish his new album.” This set the stage for one of the most interesting collaborations of the seventies, the soulful Ben E. King and the progressive Average White Band. The result was the 1977 release, intimately titled Benny and Us.

In 1999 Ben E. King’s versatility was accentuated through collaborations with Milt Jackson and the late Ray Charles’ protégé David “Fathead” Newman; this resulted in the unique project titled Shades Of Blue. Of course, this was not Ben E. King’s first collaboration; he recorded a duet with legendary diva Lavern Baker when he was just twenty-two.

King’s first release of this century (2000) was the studio project, “Person To Person,” which is a tribute to his love of jazz and blues standards along with his passion for fine arrangements. This album is a live recording at New York’s famed Blue Note Club. King plans a new CD soon and he continues to perform live at top venues around the world. He performed a mini-tour with a legend-filled ensemble titled Four Kings; which featured superlative vocals and timeless arrangements from a stellar cast.

As a philanthropist, Ben E. King’s love for the youth and disadvantaged of America has inspired him to establish a charitable foundation to address some of their needs. The Stand By Me Foundation sponsors a yearly celebrity- golf tournament and other fund-raising endeavors. This also provides an avenue for the great Ben E. King to reinvest in the community that is so precious to him.

Ben E. King is still recording and pleasing fans from Tokyo to the streets of L.A. Truly, one of the premier group and individual artists to ever clutch a microphone, Ben E. King’s rich, velvety voice is a priceless national treasure. “I’ve Been Around,” a True Life Entertainment production, was released in 2006 and was followed up by his 2007 national television appearance on The Late Show starring David Letterman. The CD is full of melodious delicacies interspersed with versatile vocal gymnastics. Ben E. King’s career was poetically summed up this way: “As the auburn moon glows and the grand sun keeps shining, Ben E. King’s contribution to the world of music is one that will not only stand the test of time but one that will flourish incessantly.” Show less

"Stand By Me," Written By Jerry Leiber, Mike Stoller and Ben E. King,... 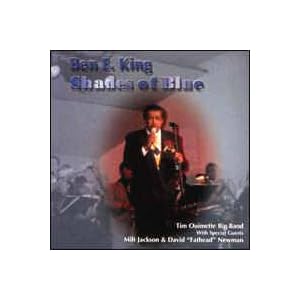 All About Jazz musician pages are maintained by musicians, publicists and trusted members like you. Interested? Tell us why you would like to improve the Ben E. King musician page.