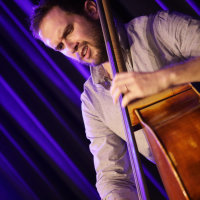 As a double bassist, Hedquist is known for his versatility and feels at home playing classical or jazz music. As a classical musician, he has performed with the West Valley Symphony, Phoenix Opera, and as Principal Bassist for the Musica Nova Orchestra. Hedquist has also performed in chamber concerts with the ASU String Faculty as part of the Stradivarius Concert Series at the Musical Instrument Museum, with violinist Mark Fewer (McGill University) as part of the Lotus Land Project and performs solo recitals throughout the Phoenix Metropolitan area. In 2016, he was placed as runner-up for the Arizona State University’s Concert of the Soloists Competition.

All About Jazz musician pages are maintained by musicians, publicists and trusted members like you. Interested? Tell us why you would like to improve the Ben Hedquist musician page.