Benjamin Boone is a saxophonist, composer, and Professor of Music at California State University Fresno. He has served as a U.S. Fulbright Scholar to Ghana (2017-18) and a U.S. Fulbright Senior Specialist to the Republic of Moldova (2005). He grew up in the small textile town of Statesville, North Carolina, the youngest of five sons. “My brothers pursued history, literature, art and biology, so I have always gravitated towards interdisciplinary projects,” he says. “I like to make artistic statements that address culturally relevant topics in a germane manner.”

A respected composer in both new music and jazz circles, his Origin Records release The Poetry of Jazz, a collaboration with the late U.S. Poet Laureate and Pulitzer Prize recipient Philip Levine, was recognized as a milestone poetry/music project immediately upon its release in March 2018. Praised in leading musical and literary publications, featured on NPR’s “All Things Considered,” voted the #3 “Best Album of 2018” in DownBeat Magazine’s annual Readers Poll (just behind Chick Corea and Wynton Marsalis), and an Editor’s Pick in The Paris Review, The Poetry of Jazz established Boone as one of the most captivating and compelling voices among contemporary artists exploring the intersections between poetry and music. Just this September, NPR’s Terry Gross referenced Boone and this recording on NPR’s “Fresh Air.”

While in Ghana as a Fulbright Scholar (2017-18), Boone co-founded the new music ensemble The New Global Ensemble, comprised of traditional Ghanaian xylophonist Aaron Bebbe Sukura, traditional Ghanaian singer and drummer Baffour Awuah Kyerematen, and long-time collaborator German electro-acoustic violinist Stefan Poetzsch. This ensemble unites traditional Ghanaian music/instruments with 21st century Western new music. Boone also collaborated with The Ghana Jazz Collective on the album “Joy,” which will be released on Origin Records on March 20, 2020. “Ghana’s music and culture transformed me musically and personally,” said Boone in a Fresno State article. “Music is part of the fabric of life and everyone participates and has a role. It’s a beautifully communal way of thinking and being. Accra has an amazing music scene, with every type of music you can image, including a vibrant avant-garde scene.”

As a classical composer, Boone’s compositions have been performed in 35 countries, appear on 28 recordings, and have been the subject of several National NPR and Bayerischer Rundfunk (German Radio) stories. The past several years Boone has focused on writing music that addresses relevant cultural and environmental issues, music that aspires to speak to listeners on a level that touches their soul and instigates a greater sense of empathy and understanding. His ethnohistorical opera Ascencion, about Native American cultural genocide, co-written with Helene Joesph Weill, was featured on NPR’s “Weekend Edition Saturday,” and his orchestral work Waterless Music: A Drought Symphony, premiered at Los Angeles’ Disney Hall, was featured on NPR’s “Here and Now.” His compositions are published by Latham Music, Lorenz, Alry Publications, Sentinel Dome, Eighth Note Publications (Canada), GPG Music, and VR Music.

He has presented guest lectures and master classes at the Academy of Music (Moldova), the University of Magdeburg (Germany), the University of Erlangen (Germany), Charles University (the Czech Republic), the University of Cape Town (South Africa), Addis Ababa University (Ethiopia), University of Ghana, Kumasi University (Ghana), and the Buenos Aires Festival of Saxophone, among many others in the U.S. He has been in residence at festivals and colonies such as Fundación Valparaíso (Spain), May-in-Miami, June in Buffalo, the Bowling Green New Music Festival, the Atlantic Center for the Arts, and the Aspen Music Festival, and he has given presentations at conferences such as the Society of Composers (national and regional), National Flute Association, North American Saxophone Alliance (national and regional), National Association of Composers, World Saxophone Congress, Society for New Music, Conference on American Culture, Music Education Association, and International Trumpet Guild.

At California State University Fresno, Boone has received the University’s “Provost Award for Excellence in Teaching,” the “Provost Award for Outstanding Achievement in Research, Scholarship and Creative Activities,” the “University Faculty Spirit of Service Award” for his design of a program hailed nationally as a model of Service-Learning Best Practices, the “Best in Show Award” for his commitment to academic excellence, and the University’s most prestigious award, the “Presidents Award of Excellence” for his “integrity, leadership, and commitment to the university.” Prior to his appointment at Fresno State, he taught at the University of Tennessee, where he received the “Chancellor’s Award for Excellence in Teaching.”

Boone received his two undergraduate degrees in Music Theory and Applied Music/Jazz Saxophone from The University of Tennessee, his Masters of Music in Composition from Boston University (where he was awarded their composition prize two consecutive years), Post-Graduate Studies in Jazz at Manhattan School of Music (while he was completing his Thesis from Boston University), and his Doctor of Musical Arts degree in Composition from the University of South Carolina. His primary teachers have included Bernard Rands, Charles Fussell, Jerry Coker, John A. Lennon, and Gordon “Dick” Goodwin. He currently lives in Fresno, California with his wife, a journalist, and his two teenage sons. Show less

Second Volume Of "The Poetry Of Jazz," Much-Lauded Collaboration...

"The Poetry Of Jazz," A Collaboration Between Saxophonist/Composer... 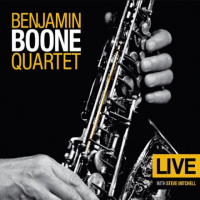 All About Jazz musician pages are maintained by musicians, publicists and trusted members like you. Interested? Tell us why you would like to improve the Benjamin Boone musician page.