Motivated by a diverse musical palate and burning passion to connect with people of all creeds through his music, violinist Benjamin Sutin finds himself in the most culturally varied city in the world, New York City. Since arriving here four years ago Benjamin has performed in Pandit Samir Chatterjee’s Robithakur (A Ballet on the Life of Tagore) at NJPAC’s Victoria Theater in November 2011, with drummer Ronnie Burrage, pianists George Burton and Benito Gonzalez, and most recently with Afro-Cuban pianist Larry Harlow and his restoration of Hommy - A Latin Opera at Lincoln Center Outdoors in July of 2014. In an effort to more fully realize his dream, Benjamin has started his own seven piece jazz band called “Klazz Ma Tazz” inspired by Klezmer, Eastern European Folk Music, Indian Music, and much more. While continuing to perform around the city in venues such as ShapeShifter Lab, their debut CD is planned to be released on September 1st, 2015 on “One Trick Dog Records”. This will be Benjamin’s 2nd release as a band leader, the first coming out in 2009 with his former group, The Passing Tones (who performed at events such as the DuPont Clifford Brown Jazz Festival in 2008). The album was released under the title “My Pet Jade” and received rave reviews from jazz violinist, Jean Luc Ponty.

Meanwhile, with an equal love for rock n roll, Benjamin has made his way into the rock scene upon being called by Tommy Byrnes (Billy Joel’s Lead Guitarist) as a guest performer with Big Shot, the Billy Joel cover band at the TD Bank Amphitheater in Bensalem, PA. Prior to this he played in the NJ/PA/NY regional string section for the Trans Siberian Orchestra’s “Last Christmas Eve” Tour during the winter of 2012 and 2013, performing for sold out crowds in venues such as the Nassau Coliseum, Prudential Center and Wells Fargo Arena.

Although this satisfied his love for rock n roll, it only touched the surface of Benjamin’s developing fascination with chamber music. From 2009 to 2011 Benjamin played in the Philharmonic of Southern New Jersey and has recently played as a ringer in the Manhattan School of Music’s illustrious Tactus Ensemble’s performance of Oliver Messiaen’s Sept Haikai in May of 2014. However, his main inspiration came in the spring of 2013 and 2014 when he performed in a String Quartet/Piano Trio Concert composed by Lewis Porter and featuring Jazz Piano legend, Don Friedman. With a growing appeal for a jazz string quartet, it finally came to fruition when in the fall of 2013 Benjamin Sutin and Nathan Kamal co-founded “Stringency”.

Stringency is a traditional string quartet that stretches the boundaries of chamber music to include jazz and improvisation with original compositions and arrangements. With inspiration from the Don Friedman/Lewis Porter concerts, Benjamin has recently expanded the group, composing for string quartet plus jazz rhythm section and other additional instruments. Inspired by a collaboration in the Summer of 2013 with Dancer and Choreographer, Nicole Sabella (Mark Morris Dance Group), Benjamin plans on using the group for various multi-media engagements in the future.

Born and raised in Southern New Jersey, Benjamin began his musical studies at 5 years of age with Suzuki training upon noticing the instruments “beautiful voice” at an earlier concert. He added the piano to his arsenal only 3 years later and has worked as a piano accompanist for student recitals at the New Jersey School of Music in Medford, NJ and for Amelia Gold’s “Summer String Festival” at the Elisabeth Morrow School in Englewood, NJ. He is also currently working working with singer/songwriter Julie Hill on Piano/Vocal duos using music and poetry written by Benjamin.

Throughout high school Benjamin studied at the Philadelphia Clef Club of Jazz where he met his late mentor and guru, jazz violinist John Blake Jr. whom he studied with for seven years. Out of the many things he learned from John, one of the most critical was that we, as human beings and artists never stop learning; education is a life-long pursuit. Inspired by his words, Benjamin has become a sought after educator in New York City and New Jersey.

In addition to working as a freelance teacher and private instructor at Brooklyn Musical Arts, Benjamin teaches beginning group violin at the Harlem School of the Arts and helped initiate a violin program in the fall of 2013 through their outreach department at the Neighborhood Charter School of Harlem (A School for Autistic Children).In March of 2015 he presented a series of clinics to orchestral students throughout the Lenape School District in Southern New Jersey; opening the eyes and ears of aspiring string players to the unique realm of possibilities found in jazz and improvisation. In the summer of 2015 Ben was hired as a visiting artist at New Jersey School of Music, teaching private jazz string lessons.

In May, 2015 Benjamin graduated with a BM in Jazz Violin Performance from the Manhattan School of Music where upon entering the school, Benjamin’s private teacher, classical and jazz violinist Sara Caswell said the following: “His adventurous musical lines and underlying creative energy left me feeling I’d witnessed a unique voice destined for something great.” Show less

”First of all just to say how impressed I am with Ben. He's going places. I wouldn't say this lightly, and I rarely say it at all. But he's a very special kid, and a special talent.”

“Ben is a terrific violinist, very fluent, and an excellent reader and improvisor. He's also a pleasure to work with, personable and fully professional. If you need a violinist, you should hire him!” - Lewis Porter, Ph.D.

“Always swinging, always creative, and always a great hang! Ben Sutin is a talented, hard-working, dedicated musician and one to watch...”

Hour long demonstration of jazz improvisation on orchestral stringed instruments. Clinic includes an introductory performance and Q and A, followed by interactive improvisation exercises, learning simple tunes and concluding with a group jam session where all participants get the chance to improvise their own solo or participate in call and response with the rhythm section provided. Clinic subject to change based on topics discussed in Q and A and based on general age range and level of participants. 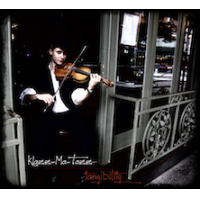 All About Jazz musician pages are maintained by musicians, publicists and trusted members like you. Interested? Tell us why you would like to improve the Benjamin Sutin musician page.