Bernard Peiffer was born on October 23, 1922 in Epinal, in the Vosges district of northeastern France. Bernard’s father, formerly an army man, was a violinist and was devoted to chamber music. An uncle, Georges Peiffer, was a composer and church organist. Bernard began his music study at the age of nine; he studied piano and harmony privately with Pierre Maire (a student of Nadia Boulanger) and dazzled older students with his ability to play back extended sections of classical pieces by ear. He continued his studies through his teens at Ecole Normale de Paris, the Marseille Conservatory, and the Paris Conservatory, where he won the coveted and revered First Prize in Piano.

Attracted by the freedom and improvisational basis of jazz and influenced by the pianistic styles of Fats Waller and Art Tatum, Bernard made his professional debut in 1943, at the age of 20, with alto saxophonist Andre Ekyan. Soon after his debut he worked at the Boeuf Sur Le Toit Paris nightclub with Django Reinhardt. Bernard credited Reinhardt with teaching him the music business and Django predicted a brilliant career for the young Peiffer.

After witnessing the execution of his friend on a Paris street at the hands of the Gestapo, Bernard joined the French Resistance Movement. He was eventually captured by the Gestapo and imprisoned for over a year.

Out of the army in 1946, he resumed his music career, playing concerts for the French Hot Club at the Salle Pleyel and resuming his association with Django Reinhardt. He toured with Hubert Rostaing and Jacques Helian. In February 1948 he performed in Nice at what was probably the world’s first jazz festival; it was there that Bernard’s playing so impressed Ellington alumnus Rex Stewart that he hired Bernard to tour and record with his band. After working with Stewart he recorded with Don Byas, James Moody, and Kenny Clarke, and he reunited with Django for club dates and a tour.

By 1949 Bernard was a national name. Through the early fifties his career flourished: he won a Jazz Hot Magazine Award, led his own quintet at Club St. Germain and the Ringside, composed soundtracks for films, and made a series of recordings; his first as leader, recorded for the Blue Star label, won the “Grande Prix du Disque” Award in 1953. A star in the clubs of Paris, Monte Carlo and Nice, Bernard attracted the attention of visiting American musicians like Oscar Peterson, Lionel Hampton, and Hazel Scott. Jazz critic Barry Ulanov heard Bernard perform and became an enthusiastic supporter, later writing in Metronome Magazine, “Nobody I’ve heard matches his skills as an improviser and his thorough knowledge of his instrument.” Alain Tercinet observes, “His intuition, dazzling speed and strokes of genius served by a faultless piano technique... had no equivalent on the Paris jazz scene.”

On Monday, December 20th, 1954 Bernard Peiffer left his successful career in France and immigrated to the United States. Influenced by the encouragement of his colleagues and by his own commitment to continued artistic growth, Bernard immersed himself in the American jazz scene and American culture. He settled in Philadelphia in 1954 and was soon joined by his wife Corine and baby daughter Rebecca. Frederique, his daughter from an earlier marriage to singer Monique Dozo, remained in Paris. His first American-born child, Pascale, arrived in 1956; her tragic illness and death at the age of 2 profoundly affected Bernard and is reflected in his moving “Poem for a Lonely Child”. Son Stephan arrived in 1962.

During his first decade in the United States, Bernard’s career included some successes. Performances at Carnegie Hall, Birdland, the Composer Room, the Academy of Music, and the Newport Festival, in addition to television and radio appearances and the release of seven albums, all indicate a measure of success. He also received critical acclaim. Leonard Feather wrote, “Peiffer is amazing. I can’t recall any jazz pianist except Art Tatum blessed with such mastery.” He expressed the opinion that Peiffer was, in many respects, the “greatest living jazz pianist.” Unfortunately he also fell into periods of inept management and promotion, intermittent activity, and problems with record labels.

After the release of his final commercially produced album in 1965 and kidney surgery at the end of the decade, Bernard spent more time performing and teaching in Philly. He did some touring with his trio, performed at college campuses, and made a trip to Los Angeles for performances at Donte’s in September of 1970. In 1974 he performed at the Newport-New York Festival’s solo piano night held in Carnegie Hall. He brought the house down. “I thought Carnegie was going to explode,” he later said. Bernard continued to teach and perform around Philadelphia until his kidney problems worsened in 1976. He died on September 7. He was 53 years old. His career, which started with such acclaim and promise in France, never reached the level of success in the United States that critics and fellow musicians had expected.

Ironically the years leading up to his death were filled with continued artistic evolution and brilliantly creative performances. Without a recording contract, and free of the influence of producers and commercial pressures, Bernard fiercely followed his lifelong commitment to the principle that the creative artist must synthesize his influences, and make his own statement according to his own instincts and impulses.

He said, “The musician must be free to exercise his own will. If he allows himself to be limited or permits others to restrain him to any great extent, he is denying these obligations and closeting himself off from his own possibilities.” Bernard’s performances around Philly were events. Devoted audiences of musicians (including a loyal contingent of Philadelphia Orchestra players), music students, and fans were consistently treated to extraordinary performances.

Since his death his music has fallen into near obscurity and much of his most creative and visionary playing has never been available. Fortunately, a significant amount of the playing that he did around Philadelphia was captured on tape by friends and associates. It is from these tapes that this disc of solo performances was compiled, a truly historic document of one of history’s greatest keyboard improvisers. 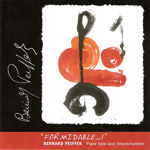 All About Jazz musician pages are maintained by musicians, publicists and trusted members like you. Interested? Tell us why you would like to improve the Bernard Peiffer musician page.