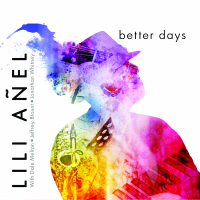 Thin Line; Better Days; Number One; Take It From Me; The Wrong Time; Family Affair; Peace of Mind; Supposed to Be; George Bailey's Lament.

Better Days, Lili Añel’s newest album, was released October 4, 2019 on Winding Way Records. This album is Lili’s ninth full-length creation, which encompasses seven original songs and two covers originally by Joni Mitchell and Sylvester Stewart. “Take It From Me,” the promotional single for this album, was released on Friday, September 27th, 2019. Añel’s album is a hybrid of jazz, folk, soul, and pop blended with Lili’s powerfully unique vocal style and lyrics steeped in real life. Better Days is for people of all ages and stages in life who are looking to be honest with themselves and have a sense of self-awareness.

All About Jazz musician pages are maintained by musicians, publicists and trusted members like you. Interested? Tell us why you would like to improve the Better Days musician page.