Bill “Bojangles” Robinson, was the most famous of all African American tap dancers in the twentieth century. Dancing upright and swinging, his light and exacting footwork brought tap “up on its toes” from an earlier flat-footed shuffling style, and developed the art of tap dancing to a delicate perfection.

Born Luther Robinson in Richmond, Virginia, his parents, Maria and Maxwell Robinson, died in 1885. Young Bill was reared by his grandmother, Bedilia Robinson, who had been a slave. In Richmond, he got the nickname “Bojangles” from “jangler,” meaning contentious, and invented the phrase “Everything's Copasetic,” meaning tip-top. He got his first professional job in 1892, performing as a member of the pickaninny chorus for Mayme Remington with The South Before the War. When Robinson arrived in New York in 1900, he challenged the In Old Kentucky star tap dancer Harry Swinton to a Buck-dancing contest and won. From 1902-1914, he teamed with George W. Cooper. Bound by the “two-colored” rule in vaudeville, which restricted blacks to performing in pairs, they performed together on the Keith and Orpheum circuits, but did not wear blackface makeup that performers customarily used.

Robinson was a staunch professional, but he was also a gambler who possessed a quick temper and carried a gold-plated revolver. An assault charge in 1915 split the act. After the split, Robinson launched his solo career, becoming one of the few African-Americans to headline at New York's prestigious Palace Theatre. Robinson's Stair Dance, introduced in 1918, was distinguished by its showmanship and sound, each step emitting a different pitch and rhythm.

Onstage, his open face, twinkling eyes and infectious smile were irresistible, as was his tapping, which was delicate and clear. Buck or Time Steps were inserted with skating steps or crossover steps on the balls of the feet that looked like a jig, all while he chatted and joked with the audience. Robinson danced in split clog shoes, ordinary shoes with a wooden half-sole and raised wooden heel. The wooden sole was attached from the toe to the ball of the foot and left loose, which allowed for greater flexibility and tonality.

In 1922, he married Fannie Clay who became his business manager, secretary, and partner in efforts to fight the barriers of racial prejudice. A founding member of the Negro Actors Guild of America, Robinson was also named “Mayor of Harlem” in 1933. Hailed as “The Dark Cloud of Joy” on the Orpheum Circuit, he performed in vaudeville from 1914-1927 without a single season's layoff. Broadway fame came with the all-black revue, Blackbirds of 1928, in which he sang and danced “Doin' the New Low Down.” Success was instantaneous. He was hailed as the greatest of all dancers by at least seven New York newspapers. Brown Buddies (1930), Blackbirds of 1933, All in Fun (1940) and Memphis Bound (1945) followed. The Hot Mikado (1939) marked Robinson's sixty-first birthday, which he celebrated by dancing down Broadway, one block for each year. Robinson turned to Hollywood films in the thirties, a venue hitherto restricted to blacks. His first film, Dixiana (1930) had a predominantly white cast; Harlem is Heaven (1933) was the first all-black film ever made.

Other films include Hooray For Love (1935), In Old Kentucky (1935), The Big Broadcast of 1936 (1935), One Mile From Heaven (1937), By An Old Southern River (1941), and Let's Shuffle (1941). Stormy Weather (1943) featured Robinson, Lena Horne, Cab Calloway and Katherine Dunham and her dance troupe. Robinson and Shirley Temple teamed up in The Little Colonel (1935), The Littlest Rebel (1935), Just Around the Corner (1938) and Rebecca of Sunnybrook Farm (1938), in which he taught the child superstar to tap dance. Claiming to have taught tap dance to Eleanor Powell, Florence Mills, and Fred Astaire, Robinson profoundly influenced the younger tap dancers at the Hoofers Club in Harlem, where he also could be found gambling and shooting pool.

Throughout his lifetime, he was a member of many clubs and civic organizations and an honorary member of police departments in cities across the United States. His participation in benefits is legendary and it is estimated that he gave away well over one million dollars in loans and charities. “To his own people, Robinson became a modern John Henry, who instead of driving steel, laid down iron taps,” wrote Marshall Stearns. When Robinson died in 1949, newspapers claimed that almost one hundred thousand people turned out to witness the passing of the funeral procession. The founding of the Copasetics Club insured that his excellence would not be forgotten 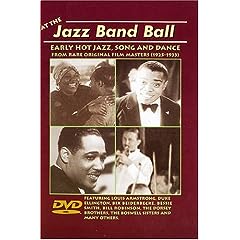 At the Jazz Band Ball

All About Jazz musician pages are maintained by musicians, publicists and trusted members like you. Interested? Tell us why you would like to improve the Bill 'Bojangles' Robinson musician page.