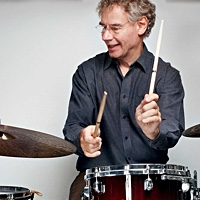 Bill Bruford has consistently demonstrated an ability to bring rhythmic crispness and sophistication to some of the most complex and demanding arrangements in contemporary music.
—Michael Shore, Modern Drummer

Bill Bruford grew up with jazz. As an amateur drummer in the 1960s, and after a handful of lessons from Lou Pocock of the Royal Philharmonic Orchestra, he began his professional career in 1968. He was a guiding light in the so-called British “Art Rock” movement, touring internationally with Yes and King Crimson from 1968-74. There then followed several years spent observing and participating in the music making processes of, among others, Gong, National Health, Genesis and U.K., until Bill felt ready to write and perform his own music with his own band Bruford, recording four albums from 1977-80.

It was, however, the reconstituted King Crimson of 1980-84 that provided the vehicle for his revolutionary use of electronics in developing the melodic side of percussion. Following an interim two year/two album stint improvising on acoustic piano and drums with Patrick Moraz, Bruford formed his electro-acoustic jazz group Earthworks in 1986, with Django Bates and Iain Ballamy, specifically to continue this work on melody from the drum set, but now in a jazz context. Earthworks, the group's first offering in 1987, was named the “third best jazz album of the year” by America's USA Today; then came Dig? (1989), All Heaven Broke Loose (1991), and the summer 1994 Live set, Stamping Ground.

King Crimson again proved itself a veritable percussion think-tank when it launched the double-rhythm team of Bruford and Pat Mastelotto in the 1994 double-trio incarnation. Through late 1994 and 1995, the band toured the world, giving 120 concerts, and producing studio and live CDs documenting its fresh and innovative use of two drummers. 1996 saw further King Crimson concerts, and the production of a CD Rom encapsulating Bruford's approach, in a tri-format combination of audio and MIDI/digital data, entitled Packet of 3.

In between all this, Bill also found time to record and/or tour with Kazumi Watanabe, David Torn, The New Percussion Group of Amsterdam, Jamaaladeen Tacuma, Akira Inoue, Al Di Meola, Anderson Bruford Wakeman and Howe, the Buddy Rich Orchestra, Tony Levin, Pete Lockett and his old firm Yes amongst others. He continued his work as an active clinician with a series of clinics in Europe and America in 1993, culminating in his highly acclaimed appearance at the Percussive Arts Society International Convention at Columbus, Ohio in November. In 1990, the readers of Modern Drummer Magazine voted him into that magazine's Hall of Fame.

The late '90s saw Bruford underlining his commitment, and return, to jazz and 1997 saw two major releases. The Earthworks “best of” compilation, Heavenly Bodies, taken from all four albums and including previously unreleased material was released in May on Virgin Record, U.K. Then a late summer release of fresh material with jazz titans Ralph Towner (guitars and piano) and Eddie Gomez (bass) entitled If Summer had its Ghosts, appeared on King Crimson's Discipline Records in September.

Touring internationally with the second edition of Earthworks, featuring Steve Hamilton (keyboards) and Patrick Clahar (saxophones), the band's live work led to the release of a sixth C.D. “A Part and yet Apart” in 1999. Electronic percussion made way for the warmer looser style of the more conventional sax-piano-bass-drums line up, and Bruford continued to bring the best of the young British players to the attention of a rapidly growing international audience.

The new millennium saw a live album release by Bruford Levin's Upper Extremities entitled B.L.U.E. Nights, and the augmentation of Earthworks with the celebrated jazz guitarist Larry Coryell for the 2000 summer jazz festival season. Following an extensive 22 date tour of the U.K., Earthworks recorded it's seventh C.D. in November entitled “The Sound of Surprise”. Spring 2002 saw the imaginative simultaneous release of a) a Live Double CD from London called “Footloose and Fancy Free” and b) a full-scale DVD from New York entitled “Footloose in N.Y.C”, and the replacement of Clahar with the multi-talented Tim Garland fresh from Chick Corea's recent group. The new CD was awarded the coveted “5 Stars” in Downbeat magazine.

In 2004, Bill formed Summerfold Records and Winterfold Records to cater for different aspects of his rapidly mushrooming catalogue, already containing some 40 titles. More recent collaborations have been with The World Drummers Ensemble, with Earthworks Underground Orchestra, and with composer Colin Riley. 2006 saw the release of the much talked about Rock Goes To College DVD from his old team “Bruford” and a 2017 8-disc boxed set from the band entitled ‘Bruford: Seems Like A Lifetime Ago 1977-1980’, both on Winterfold Records.

Retiring from public performance on January 1st 2009 after 41 years as a musician, Bill published his autobiography that March. Emboldened by its success, he began work on a second volume, but this one to be evidence-based. Armed with a doctorate from the University of Surrey, he interviewed and analysed the perceptions of a group of expert drummers in the area of creativity and music performance. “Uncharted: Creativity and the Expert Drummer” builds on his findings and was published in early 2018.

Dr. Bruford is married to Carolyn, has three grown children and five grand-children, and continues his work as an academic author from his home in the Surrey Hills, UK.

Bill Bruford Autobiography: It's the book everyone's talking about...

“Bill Bruford has consistently demonstrated an ability to bring rhythmic crispness and sophistication to some of the most complex and demanding arrangements in contemporary music” —— Michael Shore, Modern Drummer

All About Jazz musician pages are maintained by musicians, publicists and trusted members like you. Interested? Tell us why you would like to improve the Bill Bruford musician page.