From Long Island, New York, Bill grew up in a very musical household. His Dad was a conductor (NYC Subway), and his Mom  orchestrated all the activities around the house! From an early age, he and his  two brothers were surrounded by family get-togethers filled with music. It  wasn't long before he got into the act, playing accordion! Along with his  brothers he would play in many different situations throughout high school and  college – and continues to do so. Bill attended  Fredonia State University, and received a degree in Music Education. He paid  his dues in the Long Island club scene, as well as on cruise ships Bill met Russ Freeman while recording the “Brian  Moore Custom Guitars Artist Collection” CD. Russ asked Bill if he  would play on a few tracks that he was producing for his and Craig Chaquico's “Redwoods to the  Rockies.” His first Rippingtons   recording was “Topaz”, back in 1998, and he has been performing live with the  band since March of 2001. Since then Bill has co-produced all of Craig’s CDs, of  which a few songs made it to the number one position on the smooth jazz charts! Married to his sweetheart from college,  Dawn, together they have two children Angelea, and Jonathan. Dawn was diagnosed  with ovarian cancer in 2000, During her illness Bill co-wrote and produced a CD  dedicated to her called “Strong Woman”  from which they donated a good portion of the proceeds to the Ovarian Cancer Research Fund

. Although  she had a recurrence in 2006, she is currently cancer free! Bill is currently working on an album of  his own! The compositions are all originals written by Bill. This recording  features sax players Jeff Kashiwa and Eric Marienthal, and three different  rhythm sections, from the Rippingtons Dave Karasony drums and Rico Belled bass,  Joel Rosenblatt drums (Spyro Gyra, Blood Sweat & Tears, Bill Evans, Michel  Camillo) drums and Dave Anderson bass (Bill Evans, Art Garfunkle, Blood Sweat & Tears, Bob Baldwin), and Frank Bellucci drums and Jim Cammack bass. In 2006, 2010 and 2012 Bill served as the Musical  Director for the Long Island Hall of Fame awards shows. The Long Island  Music Hall of Fame is dedicated to the idea that our musical heritage on Long  Island is an important resource to be celebrated and preserved for future  generations. At these shows he provided arrangements and incidental music, and  the bands he assembled accompanied such acts as Little Anthony and the  Imperials, Gary US Bonds, Felix Cavaliere, The Lovin Spoonful, Charlie Daniels,  Eddie Money, and more. Bill also performs with the group, “The Sax Pack”. The Sax Pack is a class act  consisting of three signature sax players; Jeff  Kashiwa, Marcus Anderson and Steve Cole.  The talented trio  combines their life-long love of music and their passion for performance, to  make an impact on audiences that love music as much as they do. Committed to  sharing the excitement, spontaneity and creative energy that flows between them  on stage, The Sax Pack inspires an audience far beyond the duration of a show. Bill also played with Mary Wilson and the Supremes. Mary was appointed by the U.S. State  Department as a Culture Connect Ambassador. Culture Connect Ambassadors travel overseas interacting with youth  by running clinics, performing in concerts, motivating people through speeches,  teaching master classes, and more. Bill traveled with Mary as her accompanist  to Bangladesh, Oman, Pakistan and Africa! Bill played for the Broadway hit, “Movin” Out”, featuring the music of  Billy Joel, and the short lived “Hot  Feet” featuring the music of Earth Wind and Fire. In the studio Bill has produced recordings  for jazz guitarists Steve Briody,  and Matt Marshak. Here is a list of some of the artists that Bill has  worked with- Jeff Kashiwa Steve Cole Marcus Anderson Eric Marienthal Joel Rosenblatt Dave Anderson The Movin Out Band Patti Austin Paula Atherton Jeff Golub/ Shilts Nelson Rangell Gerald Veasly Marcus Baylor Dave Valentin Randy Brecker Show less 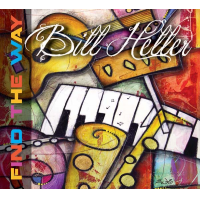 All About Jazz musician pages are maintained by musicians, publicists and trusted members like you. Interested? Tell us why you would like to improve the Bill Heller musician page.