Bill Jennings was an American jazz guitarist and composer.

Recording as both a leader and a sideman, Jennings has been called “the architect of soul jazz” and has influenced on jazz, soul, R&B, and blues guitar. B.B. King often mentioned Jennings as one of biggest influences. Jennings has recorded with many artists including Willis “Gator” Jackson, Brother Jack McDuff, Leo Parker, Bill Doggett, Louis Jordan, King Curtis, Louis Armstrong, and Ella Fitzgerald[3] and unique in his ability to play in many styles, including swing, bop, jump blues, R&B, and pop. Jennings played on “Fever” by Little Willie John, which made the Billboard R&B chart in the US and peaked at number 24 on the Billboard Hot 100.

A left-handed player, Jennings played guitar upside down, with the high strings at the top, which gave him a different approach to phrasing and bending the strings. Later in his career he lost a finger on his fretting hand and began playing bass guitar. 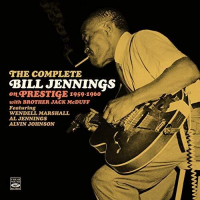 All About Jazz musician pages are maintained by musicians, publicists and trusted members like you. Interested? Tell us why you would like to improve the Bill Jennings musician page.