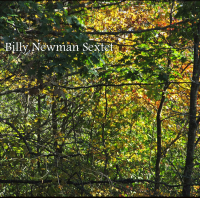 This second CD recording of Billy Newman delves deeper into the structure and aesthetic of Brazilian Choro but using a traditional Jazz instrumentation except for the use of Nylon Guitar. There are also several themes outside this genre including "He's a Mystery to Himself" a Brazilian tinged waltz with ample solo space. The suite to the departed Singer from the Northeast of Brazil features a Baiao "Ana leaves Astoria" and the slower, anguished colorful Ana's Requiem featuring the trumpet of Ben Holmes. The music expresses the composers personal search for parallels between his native NY and the Urban Brazil he has long experience as a visitor particularly Rio de Janeiro. The Linear twists and turns of Jazz and Brazilian Instrumental are paintings of the same struggles of people in unequal, historically slaving societies. The pain and ecstasy expressed in music make a seamless combination of the sounds from these cities of North and South America.

All About Jazz musician pages are maintained by musicians, publicists and trusted members like you. Interested? Tell us why you would like to improve the Billy Newman Sextet musician page.