Born 1961 in Nuremberg, she studied the visual arts, which still have an important influence on her music. Since moving to Hamburg in 1982 she has been involved in free improvisation and experimental music. Since then she has “established a distinguished grammar of sounds beyond the open trumpet” (jazzdimensions.de). She works mainly on extending the sounding possiblities of the trumpet by using splitting sounds, multiphonics and granular sounds and has developed her own extended techniques and preparations for producing these sounds. Besides this material research she is especially interested in the relation between sound and silence.

Since 2006 Birgit Ulher works with radios and uses extended speakers, fed with radio noise in her trumpet mutes. The trumpet functions as an acoustic chamber and modulates the radio noise, thus the trumpet is transmitter and receiver at the same time. Her work with radio is documented on the CD 'Radio Silence No More', released 2007 on Olof Bright.

The same concept is the basis of the duo with Gregory Büttner, where Büttner plays his sound contributions via a laptop with an output to a small speaker which Ulher uses a s trumpet mute.Their first CD 'Tehricks' based on this concept was released 2009. She performs solo, with dancers, working ensembles, and one-time collaborations with musicians from around the world.

She has been organising the festival of improvised music Real Time Music Meeting for over ten years. 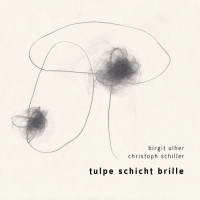 All About Jazz musician pages are maintained by musicians, publicists and trusted members like you. Interested? Tell us why you would like to improve the Birgit Ulher musician page.