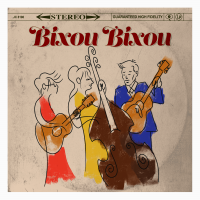 Laisse Tomber les Filles; Riverside Drive; La Vie en Rose; La Javanaise; You Got a Glow; Half a Chance; After You've Gone; La Boheme; Ridin' To the Poorhouse; Sympathique; Wandering Kind; O Madeleine; The One That Got Away; Let it Pour;

Bixou Bixou - Recorded live in January 2019 features GEORGE COLE, Madeline Tasquin, and Kaeli Earle. Inviting and appealing, every track on the record accompanies an easy, comfortable mood. Impeccable guitar, superb French singing, resounding vocal harmonies, beckoning melodies ...The groove is sweet. A joy to listen to, beginning to end. Produced by: Bixou Bixou and John Cuniberti Recorded & Mixed by: John Cuniberti Art Design: Eyeball James GEORGE COLE: Singer and breakneck acoustic guitarist George Cole lives in a musical world all his own.... a world in which Django Reinhardt, The Ramones, Nat King Cole and Doc Watson get equal billing with Irving Berlin, George Gershwin, Willie Nelson and the Great American Songbook. Born in San Francisco and raised in Richmond California George is a BAMMIE Award winner, his singing and guitar playing is filtered through Rock and Roll, Gypsy Jazz and All things American. He was guitar teacher and mentor to Rock and Roll Hall of Fame Inductees Billie Joe Armstrong and Mike Dirnt of Green Day. Chris Isaak had Cole lay down guitar tracks on his platinum selling Forever Blue release and Jazz great Keely Smith handpicked George to play guitar and sing duets with her on her last tour George Cole is the guitarist the David Grisman Quintet and has two releases on Grisman’s highly regarded Acoustic Disc Label. In his 2019 Nat King Cole at 100, Centennial Celebration Concerts, George Cole honors a true American genius of Jazz music. George Cole is a composer, lyricist, and highly skilled arranger; his current projects include The George Cole Quintet Riverside Drive Redux (acoustic string/swing ala David Grisman Quintet), The George Cole Orchestra (7-16 piece big band), The Guitar Professor™ instructional video series with accompanying books, and recording an all new solo record.  From Carnegie Hall to The Paramount, George Cole has performed and toured internationally seizing every opportunity to pull out all the stops to bring audiences to their feet again and again. https://www.georgecole.net/

All About Jazz musician pages are maintained by musicians, publicists and trusted members like you. Interested? Tell us why you would like to improve the Bixou Bixou musician page.